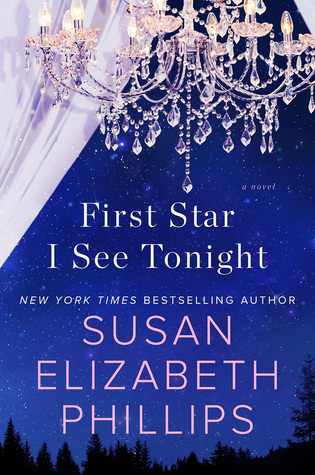 From the bustling streets of Chicago to a windswept lighthouse on Lake Superior to the glistening waters of Biscayne Bay, two people who can’t stand to lose will test themselves and each other to discover what matters most

First Star I See Tonight by Susan Elizabeth Phillips, one of my all-time favourite authors and for some reason I missed a few other books so I was straight on to amazon to one click them. The Chicago Stars series is so much fun and I’ve loved every book in the series.

Cooper Graham is thirty-seven years old and is a retired football player, after taking Chicago Stars all the way to the Super Bowl. He then decides it’s time to get out while the going is good. His next venture in life is a trendy night club he called Spiral. As with everything in life he does it to perfection and Spiral is becoming a huge success.

She was a woman who attacked life instead of waiting for it to unfold around her.

Piper Dove has bought her deceased father’s private investigating firm and her first job is to follow the football star, Cooper Graham. But after he spots her early on she can’t help but feel she has failed her first high profile job. She’s not sur how she will survive finically. Until Cooper offers her a job.

When was she going to grow up enough not to regard everything in life as a test she had to pass to prove her own worth?

I laughed so much through this book, it was so enjoyable. I thought it was so entertaining and a great instalment in the Chicago Stars series. The secondary characters where so great and loved every word of this book. Highly recommend!