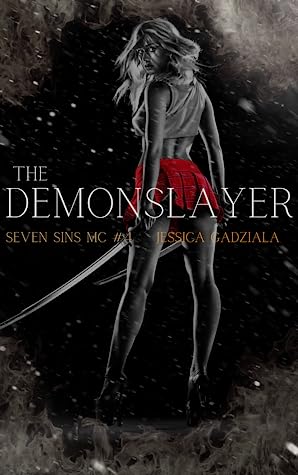 He knew he could never have her.
But he had no control over his reaction to her, the Claiming of her that was out of his hands.
He couldn’t seem to stop coming when she called, even though he knew she was only going to use him then reject him again, leaving him heartbroken all over again.
That is, of course, until she needs his help…

She wasn’t supposed to want him.
He was everything she existed to loathe—the evil she was meant to eradicate from the world.
But there was no denying her need for him.
The problem was, he always wanted more.
And she couldn’t give it to him.
But when there was a case she needed help with, there was only one place she could turn.
To him.
The closer they got, though, the more she saw that maybe it wasn’t just him who had feelings after all…

5 All the Gods Stars!

The Demonslayer is the fourth book in the Seven Sins MC series by Jessica Gadziala. I was wondering how Jess would do this story and where it would go, as we have heard from previous characters in previous books. I was not disappointed,

What’s happens when Minos (a demon) falls for Dale (a demonslayer)?! Well holy hell and maybe heaven breaks lose that’s what! I loved this book and I loved these two together. My heart broke for Minos at times and the way he jumps whenever Dale needs him.

I love the direction Jess is going with this series and introducing Father Severide, Well yes please! The secondary character’s introduced in this book where fire and I’m hoping we’ll get more. I think at the end of this book we are all wondering what is going happen next, big questions left to answer. I’m so excited for the next in this amazing series.