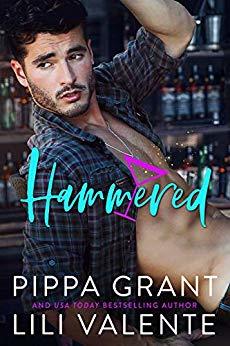 I didn’t mean to kidnap the groom.

It was an accident.

At least I didn’t take much time to plan it. It was more of a spur of the moment kidnapping. Does that count?

One minute, the town’s bad boy is standing at the altar about to marry the world’s most evil kindergarten teacher. The next, he’s passed out in my Vespa sidecar with his bride hot on our tail.

But I didn’t have a choice! I couldn’t stand by and watch Jace O’Dell be blackmailed into a loveless marriage. And besides, what’s a little kidnapping between friends?

And maybe I can’t quit thinking about that night at his bar when he closed up early and had me on the rocks.

And maybe this crazy stunt is going to blow up in both of our faces.

If it does, I’m blaming the moonshine.

Even though the only thing I’m hammered on when it comes to Jace is love—straight up, no chaser.

Hammered is the second book in the Happy Cat series by Pippa Grant & Lili Valente. This is a sweet and silly rom-com and a lighter read for when needed.

“It always hurts to grow. Sometimes a little, sometimes a lot, but we come out on the other side, and we’re better for it.”

Jace O’Dell is the younger brother of Ryan whom we met in the first book. Jace owns the bar, The Wild Hog and thinks he deserves nothing but bad luck. He tries his best to stay out of trouble but for some reason one of the town cops has it in for him and seems to be waiting for him to mess up and arrest him.

“She’s the right in a world that’s always felt a little bit wrong.”

Olivia Moonbeam is a bit of a free spirit. She drives around town in a Vespa and believes in auras and crystals. She knows Jace is for her but sometimes that doesn’t always mean they end up together and she knows that.

A tiny, adorable hedgehog named Princess, a racoon and a squirrel dressed as Sherlock Holmes, i mean what more could you want from a book! Both these authors have done a great job, writing and telling Jace and Olivia’s story. I highly recommend it for those romance lovers out there that need something light to get them through a week.