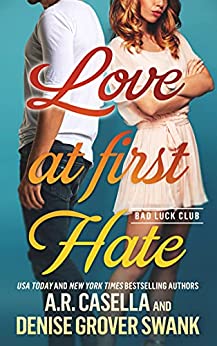 The first book in a new series by Denise Grover Swank and A.R. Casella, authors of the USA Today bestselling Asheville Brewing series.

Blogging about bad dates used to be fun, but a girl can only take so much foolishness. So I broke up with my job.

Newly funemployed and in need of a break, I go to Asheville to dogsit for my sister…and stumble onto a scoop big enough to put my fake-dating days behind me forever.

Augusta Glower, local success story, wrote a bestseller about the self-help group she started. People think her system works, and copycat Bad Luck Clubs have sprung up nationwide. Something feels off, though, and a little poking around by yours truly suggests she stole the idea.

There’s one problem. I have to prove it, and the guy she ripped off—super-hot house flipper Caleb Reynolds—seems to…well, hate me. Which is too bad since his secrets aren’t the only thing I’d like to peel away.

Molly O’Shea is my worst nightmare.

Is she sexy as sin? Well…yeah. Does she smell like honeysuckle and trouble? No doubt. Is she determined to dig up my secrets with a backhoe? I’m pretty sure she got a two-week rental. But I’ll never talk. If the reason I started the club gets out, my whole life will implode.

So why is she so damn irresistible?

Love at First Hate is the first book in the Bad Luck Club series by A.R. Casella & Denise Grover Swank. This was my first read from both these authors and I found it on Kindle Unlimited. This is a rom-com book so you know exactly what you’re going to get. I needed some lighter reading books on the lead up to Christmas and this ticked all the boxes.

Molly is down on her luck with work and decides to go home and look after her sister’s dogs for her while she heads off on her babymoon. Coming home ignites something in Molly she hasn’t had in a long time. She’s excited to do some investigating and writing again.

Cal and his Dad decide to dream up the Bad Luck Club while having a few drinks one night. But they didn’t realise how big it would get and how any people it would help. But Cal wants no one outside the club to know he is involved because he has another secret he doesn’t want anyone to know.

This is a book is jam packed full of learning to trust and love.  Both these authors have done a great job of writing and telling Molly and Cal’s story. I highly recommend it for those romance lovers out there that need something light to get them through a week.