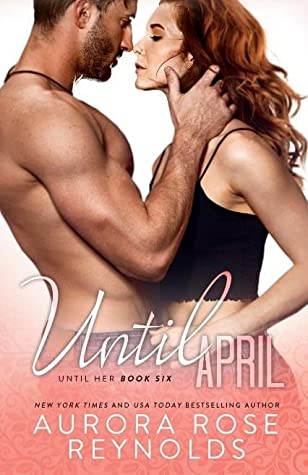 With happily ever after being something that happens to other people, April Mayson has decided to put all her energy into her career and living her best life, and things are better than ever.

Little does she know that her world is about to be turned upside down when she’s asked to help out a family friend, Maxim Kauwe.

Now, she’s dealing with a man unlike any she’s ever met before, her ex—a famous musician who’s decided he wants her back—and a possible serial killer.

With all the drama suddenly swirling around her, she will have to figure out if she is brave enough to trust Maxim with her heart and maybe even her life.

Until April is the tenth yes your heard me, tenth book in the Until Her/Him Series by Aurora Rose Reynolds. I didn’t think it was possible but this is my new favourite book from this series!

I sure as hell am not going to make myself smaller just to make a man feel better about himself.

April is a kick ass leading lady who sells houses and makes her own way in the world. She doesn’t need anyone to help her never mind a man! I was looking forward to her story, hearing about her from previous books and let me tell you, I was not disappointed!

But maybe that is the point of life—understanding that all the best parts are tied up in moments we don’t think much of at the time.

Maxim is one of ARR’s possessive alpha males that is possessive but hot all the same. He knows the minute he sees April again that she is his and he has to do anything in his power to keep her and to also keep her safe.

This was such a love story full of passion and grit! If you’ve been along for the ride from the start of this series you’re going to love this book. I loved the Underground Kings connection and it did not disappoint! I loved all the secondary characters and I can’t wait for more in this series. Maxim and April were the perfect match and another Boom-tastic book in this series.