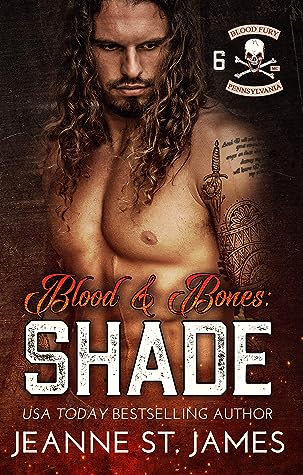 A past that defined a future…

Shade has a secret.
One he’s hidden most of his life.
Secrets created in his past.
Of a broken family. A little boy lost.
Of broken dreams. With only nightmares left in their wake.

As a prospect, his MC nicknamed him Shady because he’s quiet and keeps to himself.
As a patched member of the Blood Fury, he changed it to Shade, because that’s what he prefers… to stick to the shadows.
To remain unseen.

Then he sees her. A flicker of light at the end of a long, dark tunnel.
The only problem is, he may never escape that darkness until he sheds the chains of his past that weigh him down.

Note: Blood & Bones: Shade is the sixth book in the Blood Fury MC series and is an age-gap romance (younger man/older woman). As always, this book has no cheating, no cliffhanger and has an HEA. It’s recommended to read this series in order.

Blood & Bones: Shade is the sixth book in the Blood Fury MC Series by Jeanne St. James. We hear a little about Shade in the previous books and I’ve always been interested in his story. I didn’t expect it to be honest and this book is full of triggers so beware if this is an issue for you. For me, it’s not but it still shook me a little.

Whatever they did to survive became the building blocks to who each of them was now. What shaped their past, shaped them now and would shape their future.

Chelle is a mother of two and at least ten years older than Shade but he can’t seem to keep himself away from her.

This was such a lovely story but at times it was a hard read, Shade’s story really broke my heart. James has a way with her stories to reel us in and break us but then put us back together again afterwards. Her secondary characters are always spot on and make her stories great! I love her stories and I will definitely be reading more in this series.