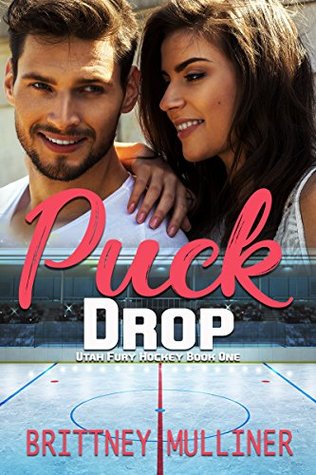 She doesn’t date hockey players, and he needs to earn the respect of his new team, but they’re willing to break all the rules for just one kiss. As long as they keep their relationship a secret everyone wins.

Since their parent’s death, Chloe Schultz has put every ounce of her energy into her twin brother, Erik’s, NHL career. She won’t let distractions—like dating—get in the way of keeping the Utah Fury as the championship team. Until she meets Reese.

Reese Murray was shocked when he was traded the week before the season started. He’s bitter, but he won’t let that stop him from proving he’s the best. The Fury welcomes Reese, with one warning, stay away from the marketing manager, Chloe Schultz, if he wants to stay on Erik’s good side. Too bad she’s the first woman that’s caught his eye in years.

Can Chloe and Reese keep their focus while trying to hide their growing attraction, or will their secret come out and tear the team apart?

Puck Drop is the first book in the Utah Fury Hockey series by Brittney Mulliner. This was my first read from this author and I was excited to find another hockey sports book. Chloe doesn’t date hockey players. She is there to support her twin brother and do her job as head of digital marketing for the team that have now become her family. She doesn’t want to do anything to jeopardise that.

Reese has just been traded in from Boston, from a team he began his career with and a team he thought were his family. He thought Boston would be where he played his whole career out but things change and now he is in Utah. He has to try to make the most of things and continue to do his best. He has one rule “no dating” during hockey season but then he meets Chloe and well he’s ready to throw that rule out the window.

She wouldn’t have to go out with me if I were dead. And I was pretty sure I would be if I knocked on Erik’s door and asked for his sister.

This was a really nice and sweet read. Although there was a little drama thrown in and Chloe’s yo-yoing and double standards got on my nerves a little, overall it was an enjoyable easy read for me between heavy books. The secondary characters were nice to read and I will definitely be reading more in the series.