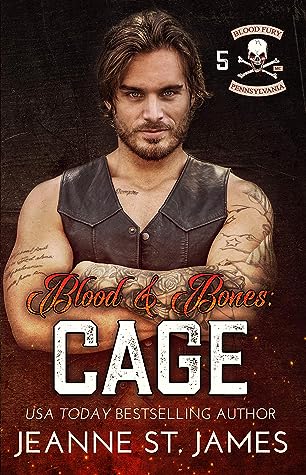 When life takes a turn least expected, you better hang on tight…

When an unexpected delivery lands on Cage’s doorstep, the Blood Fury MC’s Road Captain realizes his future’s about to change. Forever.

He’s not ready to deal with the responsibility life just handed him and isn’t afraid to admit he needs help. Desperately.

The answer to his problem comes in the form of a strong, gorgeous woman he hasn’t seen in over twenty years. Since Jemma’s no longer a kid he can ignore, he must remind himself she’s only there for one reason. And causing problems between him and her brother, the club’s Sergeant at Arms, is definitely not one of them.

With her help, Cage slowly begins adjusting to the new normal his life has become. Until the Shirley Clan does the unthinkable. Now it’s up to him to make sure they regret stealing what’s his. With everything to lose, this will be the most important fight of his life.

Note: Blood & Bones: Cage is the fifth book in the Blood Fury MC series. As always, this book has no cheating, no cliffhanger and has an HEA. It’s recommended to read this series in order.

Blood & Bones: Cage is the fifth book in the Blood Fury MC series by Jeanne St. James. Cage is a member of the Blood Fury, he’s always had a complicated relationship with woman and never goes for long term. But his life is about to change in a huge way when a baby is dropped off to the garage he works at with his name on the note.

Jemma, Judges’ sister happens to help cage with his problem but she’s adamant that she is only there to help temporarily.

With the help of Jemma he may just realize the life he has been living is a pale comparison to the life he could be living.

Life could be cut short unexpectedly. The time spent with the ones you love was never enough. Any time you had with them shouldn’t be wasted.

But with Jemma there helping him he realises maybe he was really living his life before and with her he may see a new future for himself, but how does he convince Jemma that she is his future.

This was a great instalment in the Blood Fury Series and I really enjoyed it. The story was engaging and the secondary characters as always where what made this story great. I will definitely be reading more in this series.