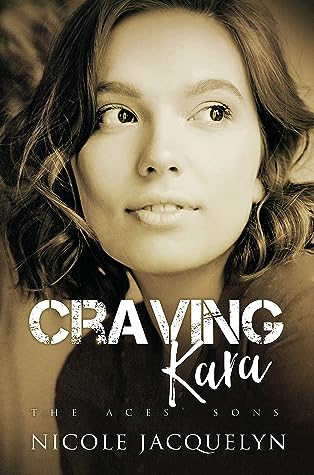 Kara MacKenzie has known since she was fifteen years old that the only way to protect the people you love is by telling them nothing.

The day Draco Harrison got out of prison she knew she was in serious trouble. It was impossible to keep secrets from the person who knew you almost as well as you knew yourself.

Her plan was to avoid him at all costs.

For nearly a year, she kept her distance.

She’d gotten pretty good at that, too.

There was only one small problem.

Craving Kara is the seventh book in The Aces’ Sons series by Nicole Jacquelyn. I love Nicole’s books but unfortunately this fell very short for me, which was disappointing. Kara was so annoying and irritated me to know end. There was very little actual MC in this book at all.

The only thing I liked about this book was Draco, he was local, kind and very likeable.

This book didn’t have enough detail in it for me and it was very long winded in parts. The secondary characters where good, but so many in this book I lost count of who some people where and it just confused me more.

Overall a disappointing read that I thought would be much better and this pains me to say as I know how much authors put into their work and especially an author who I love but I like to be honest and so that’s what I’m doing.