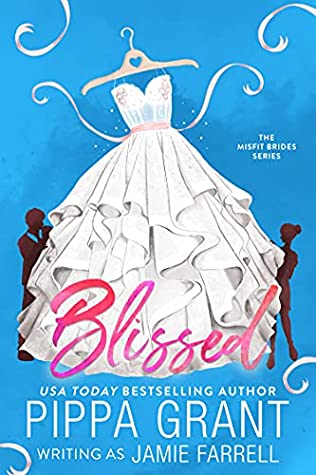 Welcome To Bliss, the Bridal Capital of the Midwest!

Single mom Natalie Castellano isn’t feeling so blissful these days…
Natalie’s made a career out of screwing up all over her hometown. But it’s redemption time, and she’s putting on her big girl panties to make sure this year’s bridal festival goes off without a hitch. Even if it means she has to play nice with the man who broke her fairy tale.

She’s definitely not the one for him. Or is she…
World adventurer and reluctant local hero CJ Blue doesn’t want to be in Bliss anymore than Natalie wants him here. But family obligations have brought him back, and now he’s somehow been roped into saving the town tradition he’d rather forget with the woman whose kiss he can’t forget. She frustrates him and drives him nuts but he’s had more fun giving her a hard time about the bridal festival than he has in years.

And their fun is just starting…
Despite their rocky past, these two wounded souls have more in common than they expect. They’ve both loved and lost, they’ve both tried to move on, and now they’ve both been been banned from the local church confessional after…well, they’re not supposed to talk about it. But by joining forces for the sake of Bliss, they might find the courage and the sparks to risk love one more time.

Note: BLISSED was previously published for like 5 minutes many years ago as THE HUSBAND GAMES. Publishers Weekly called it a “Marvelous romantic comedy” in a starred review and named it as a “Self-Published Star” of 2014.

4 Blissed out Stars on Goodreads

Blissed is the first book in the Misfit Brides series by Jamie Farrell Writing as, Pippa Grant. As soon as I heard that Pippa Grant had another series that I hadn’t read I quickly jumped into it.

The husband games is a fifty year old tradition in Bliss, Illinois and Natalie needs to make it the best yet in memory of her mother. But that’s easier said than done when she is not welcome for being a divorcee in the most Wedding town in the country.

CJ is just home for his sister’s wedding and then he is back on his travels to truly try and forget his past. But while home he gets roped into doing something he swore he would never do again.

This was such a lovely funny, light and romantic read that also had me feeling all the feels as well. They both have their issues that they need to work through in order to see what’s in front of them. There was so many secondary characters who I know will be coming up in this series that I can’t wait to read! This was a highly entertaining read and I really think you should pick it up!