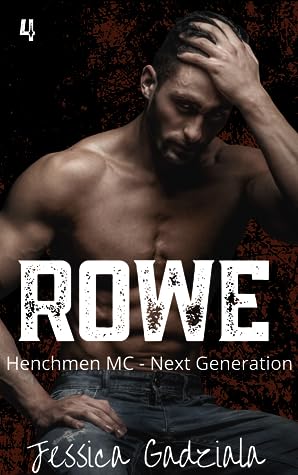 She was just going to stay away from him.
That was the only way to deal with the outcome
of a particularly devastating conversation with the guy
she’d been crushing on for years.

She’d been doing okay, even.
Well, not okay. But coping.

But when a bad situation hit the club, and a cousin
called in a favor, Billie found herself face-to-face with
someone she thought she never wanted to see again.

Rowe is the fourth book in the Henchmen MC: Next Generation series by Jessica Gadziala. We have Billie who is love, carefree spirit who likes to help people. Rowe is Malcom’s best friend and fellow brother. Although he’s not new he knows he’s not as in as some of the men he calls his brothers.
Rowe ends up getting shot and falls from a building fractioning his back and feeling the pain and losing hope he gives Billie’s creams and potions a go. But he needs to stay away as she is one of the club princesses.
I didn’t think it would happen but it did I was so drawn to Billie and her magic potion’s! She was such a pleasure to read. I felt her hidden insecurities and it gave me all the feels. This book really hooked me in and I loved every moment of it. I literally couldn’t put it down and read it in one sitting. As always the secondary characters are amazing and we are introduced to many new faces for more in this great series. I highly recommend!