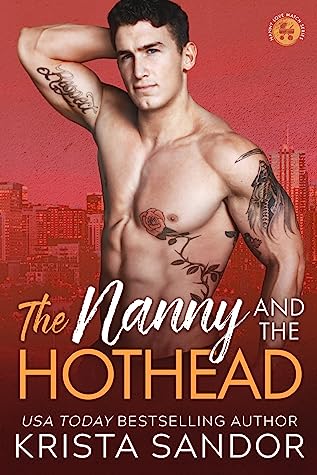 The Nanny and the Hothead

Charlotte Ames despises hotheads. You know the type. The growly, perma-scowling bully who blows his top at the slightest inconvenience. And her former boss, Top Chef Mitch Elliott, is the king of all hotheads.

How big of a jerk is he? Big enough to make her hurl a salad at the guy.

Those vegetables didn’t ask to be strewn across the floor. But Mitch deserved it!

Is he devastatingly handsome when he loses his cool? Could his stormy blue eyes, flashing with passion, melt the panties right off a gal? That would be a yes. Still, she can’t stand him. And she’d thought she’d seen the last of the culinary creep.

On the cusp of eviction and with five bucks to her name, she needs a job.

Enter the exclusive Nanny Match Agency and an opportunity to make some real cash.

The universe has one messed-up sense of humor. When she wakes up after a margarita bender and learns she’s become the hothead’s nanny, life goes topsy-turvy! But when the nanny dust settles, she sees another side of the man. A man who might be more than a hothead. A man who gazes at her with such intensity, she can barely keep from combusting.

Don’t fall for the hotheaded chef.

Her head knows what to do. If only she could convince her heart.

Could this nanny match be the match that changes everything, or will it get too hot in the kitchen for the nanny and the hothead?

♥The Nanny and the Nerd

♥The Nanny and the Hothead

The Nanny and the Hothead is the second book in the Nanny Love Match series by Krista Sandor. As soon as I finished the first book in this series I instantly wanted more and then this book lands in my kindle not too long after.

Charlotte Ames is just about jobless after throwing a salad at her boss and barely holding on to her assistant job to a very fussy photographer and after a disastrous afternoon she is told to “Go back to the beginning,” but what does that even mean. She refuses to give up on everything and she decides speed dating is the right step forward to meeting her Mr Cheesy Forever.

Mitch is haunted by his past and it’s about to catch up with him in the form of his son. He needs a nanny and he needs to get his career back on track and he only has 60 days to do this. But now he is a single father he needs to step up and get on with it. He’s just not sure what the first step is, until a fiery red head walks into his life and tells him to “Go back to the beginning,” but can he do that with all the painful memories from his past still haunting him,

This sweet, touching, and funny slow build romantic read. Oscar was a joy to read, Phoebe and himself were so entertaining and funny to read. We also have the ultra-glamorous Madelyn Monroe doing her thing among some amazing secondary characters. This was such an entertaining read and I highly recommend you pick it up!