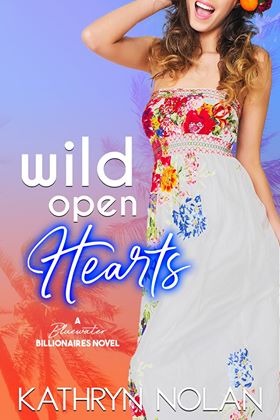 “I’ve heard that boys with motorcycles have less-than-noble intentions.”
“Not a boy,” Beck said. “And you heard right.”

Luna da Rosa is America’s Vegan Best Friend. The self-made billionaire is a flower-crowned hippie whose Instagram feed is as popular as Wild Heart – her vegan makeup company. When she’s not changing the cosmetics industry, she’s dazzling her online fans with kombucha recipes. Until Wild Heart is caught in a scandal – destroying her reputation as a cheerful do-gooder.

Beck Mason is the prodigal son of Miami’s most notorious biker gang. But Beck left his criminal family to start Lucky Dog, rescuing dogs who need the most help. Except the surly ex-outlaw never realized leading a struggling nonprofit with a ragtag crew would be so damn hard. They’re in dire need of cash – and fast.

Luna believes working at Lucky Dog will fix her image problem and get Beck the money he needs. It’s a win-win, right? Except Beck doesn’t like the sunny, free-spirited…okay beautiful…billionaire. He sure as hell doesn’t trust Luna not to use him just to make herself look good.

Sure – Beck’s grumpy, stubborn pride and meat-eating ways irritate Luna. Even though Beck’s big-heart-and-big-beard-combo is dangerously sexy. And they really shouldn’t have shared The Kiss to End All Kisses on the back of his motorcycle one night…

But as the bohemian billionaire and the burly biker give into their electrifying attraction – will their differences keep them apart? Or will they finally learn to trust their wild hearts?

Wild Open Hearts is the third book in the Bluewater Billionaires series and is written by Kathryn Nolan. This is, like a lot of the books in this series my first read from this author. We have Luna da Rosa, who created her company because she wanted a company that has values and doesn’t test on animals and is vegan friendly. She does exactly that and in the meantime also makes herself a billionaire. But then a scandal that she never foresees coming puts her whole company in jeopardy. She needs to act fast and fix her image. Lucky Dog is her way of doing this.

“You can call me Beck, by the way,” he said. “Grumpy Bearded Jerk is a bit of a mouthful,” I admitted.

Beck Mason is an ex biker royalty and after getting himself out of the life and into a whole new one that he loves he doesn’t want to lose it. But he is coming close to it, as the money is just not coming in and he needs donations fast. He has to pay his staff who are like family to him and to save as many dogs as he can. Luna da Rosa is the key to this but he doesn’t want to except help from someone like her. But he has no options left and what he finds in her is not what he expects.

“When we do good in this world, it doesn’t matter how small we believe it to be. Kindness ripples, has an impact long after our connection is finished. To me, you’re a hero.”

This was such a lovely read, I thought I would hate how unsure Beck was but to be honest it just made me like him even more. The chemistry between the two of them was entertaining to read and I loved them both. I loved Luna’s witty banter and thoroughly enjoyed every minute if this book. The secondary characters where so great and something that makes a book for me. I would highly recommend reading this book and all the books in the Bluewater Billionaires series.