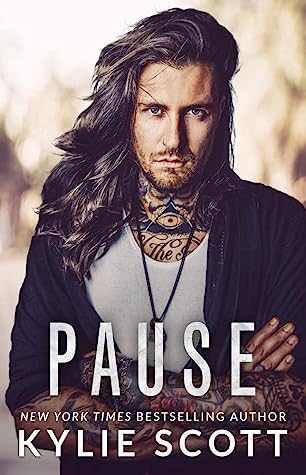 When Anna wakes up from a coma after a car crash, she discovers life has gone on without her. Her husband has been unfaithful—with her best friend—and she’s been long since replaced at work. While her old life is a distant memory, her new life feels like an empty shell. Then she meets the stranger who saved her life during the crash, and he changes everything.

Leif Larsen—tattooist, joker, and player—has his own scars thanks to the crash that put Anna in a coma. Helping her move on from her failed marriage, and create a new life, sounds like a perfect distraction. So when he needs a new roommate, he invites Anna to begin her new life with him.

Although their lives may have been put on pause, together they just might find a way to heal.

Pause is the second book in the Larsen Bros series by Kylie Scott. After ending the first book in this series I was really looking forward to the next instalment, but I was not expecting it to be Lief.

Anna wakes up from a coma after several months and finds her life is not as she left it. Her husband has turned to her best friend and boss. It seems that’s she has lost everything and has to start all over again, with her life and with her body. She is not expecting a tall tattooed stranger to walk into her life and offer her a start to this new life she must live.

I don’t feel like a hell of a lot of anything. A blank piece of paper waiting for a new story to be written. The beginning of something with no future in sight. That’s what it feels like to be me.

Lief was at the scene of the accident and badly damaged his shoulder from it but he can’t help but sit at this strangers bedside and read to her. He is drawn to her and he doesn’t know why. Having lost his heart previous he’s not sure what he wants from the future. Then months later Anna walks to his door and he ends up inviting her to live with him as a housemates. Not sure why but knowing it is the right thing to do. As they get to know each other and spend time with each other the easy friendship that develops and feelings get thrown in along the way.

This was such a lovely read and I had all the feels Lief. He’s character was so good from the very first and the relationship that develops between the two of them was something I couldn’t get enough off. I simple couldn’t put this book down and loved every minute of it. The secondary characters as always with Kylie Scott’s books was amazing and made the story great for me. It was a slow burner but so worth the build-up. Highly recommend the read and look forward to more in this series.