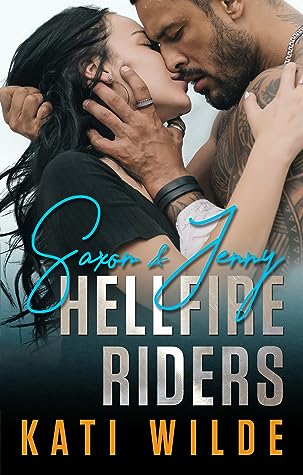 He’s the one man I can never have, but the only one I crave…

Saxon Gray has reason to hate me. He spent five years in prison after saving me from a brutal violation at the hands of a rival motorcycle club – and he paid for that rescue with his freedom. I’ve never been able to settle the debt I owe him…until now.

The menace of that old rivalry is flaring up again, and as president of the Hellfire Riders, Saxon is the one man who can keep me safe. But I want more than his protection. I want his heart.

Kati’s Note: The Hellfire Riders series was originally conceived as a series of novellas for readers who want heat, emotion, and a happy ending, but who don’t have the time to read a full-length book. Saxon and Jenny are featured in three novellas: Wanting It All, Taking It All, and Having It All, which are collected in this edition and includes this couple’s complete romance.

The Hellfire Riders: Saxon & Jenny is the first three books in the Hellfire Riders series by Kati Wilds. It is my first read from this author and she was recommended to me from a MC Romance group on Facebook. All the books in this series are free on Kindle unlimited, which when I read a new author this is a plus for me.

This story begins in the past when Saxton protected Jenny from the Eighty-Eight Henchmen without even knowing her and spent five years in prison because of it.

Now the the men of the Eighty-Eight Henchmen want Jenny and want revenge for a brother they lost!

He intends to persuade me into taking a chance on him,
but the truth is, there’s no other choice for me.

This story has it all romance, hot bikers, blood and revenge, if your looking for anything else out of this book you will be disappointed. It was originally written in three parts which if I had read it that way it would have really annoyed me but thank goodness I got it all in one. I really liked that Jenny Brews IPA and is successful in her own right. She really doesn’t need a man, she just wants one.  It had a world of kick ass secondary characters which I always love and I cannot wait to read more in this series.