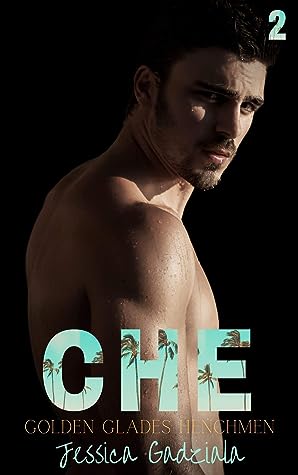 It was starting to seem like we would never get a break.
We just needed a little peace, some time to add new members, build our club up, so we could take on whatever threats were coming our way.

How could we have known that a new threat would be coming hot on the heels of someone I hadn’t seen in nearly a decade, someone who was back to call in a marker, someone who was in trouble. And, perhaps, someone I wanted to keep in my present, and my future.

Che is the second book in the Golden Glades Henchmen MC series by Jessica Gadziala. Che has a secret and hasn’t tod any of his brothers, but secrets have a way of coming out when you least expect them too.

Saskia, Che’s secret wife is in trouble and has no one else to go to. As a woman who keeps to herself, looks after herself and independent to boot she really doesn’t want to ask for her help but she has no other options.

“You were important to me,’ I admitted. ‘I was really lost and really angry and really reckless back then. And you helped me find my way, and helped soothe over the rough edges of my anger.”

Sass is a woman I want to be friends with and I had one hell of a girl crush on her. She was kick ass throughout and it has the perfect mix of action and romance. As always Jessica not only writes kickass woman she writes amazing secondary characters that make her books jam packed with greatness!