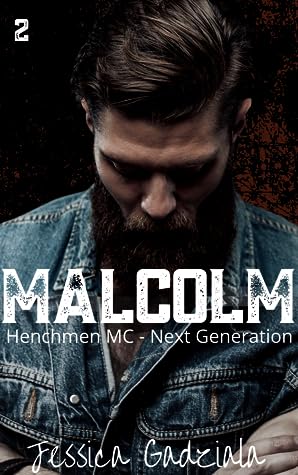 He was happy with his quiet life.
With the club, with his family, with his cabin in the woods.
He didn’t think he needed more than that.

Not until he came across her.

But when a string of unfortunate events starts to seem less like happenstance and more like something someone had planned.

Malcom is the second book in the Henchmen MC: Next Generation series by Jessica Gadziala. For those who don’t know, Malcolm is Wolf and Janie’s son, he is everything you expect from Wolf’s son. Kind, caring and over protective of the people he loves. He was so likeable and perfect for Holly.

Holly hasn’t had the best of times of late, caring for her brother after a terrible motorbike accident that leaves him badly injured. Not only does she has to give up her life but her dream job as a baker to work in a diner near where her brother lives. The one thing that keeps her going is that this is not forever, oh and the tall, dark stranger that comes in regularly!

This was such a good story and I ate it all up, like all of Jessica’s leading ladies Holly is strong and determined to do it all. We get a lot of the newer generation in this book but also some snippets of the older ones too. I could have done with more Janie but sure listen that’s just me! Her secondary characters make her stories so good and I love everyone that I came across in Malcolm’s book, we also meet new prospects Dezi, Carey and Rowe. I’m soooo looking forward to Dezi’s story and hope we don’t have to long to wait. Overall a great read that I recommend you pick up.