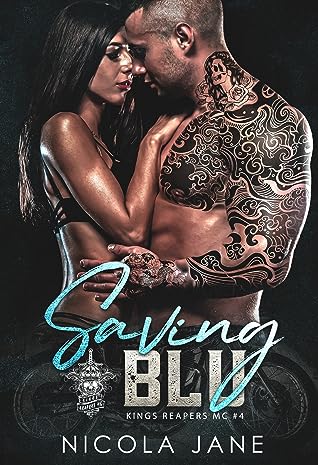 All I really wanna do is keep my head down and be the Enforcer for the Kings Reapers MC. The downside is they’re heavily involved with the mafia, and fuck, I hate the mafia. Vinn Romano is an arrogant ass but it’s his sister, Gianna, that really grates on me. Walking around like some entitled mafia princess and expecting men to fall at her feet just because of her bloodline. Fuck that, and fuck her if she thinks I’ll be like the other men she’s pushed around her entire life.

I ain’t like most men. I don’t play games, and I don’t want anything to do with the damn mafia. But things change when faces from the past turn up and start bringing my family into wars they’ve got no business starting.

Now I’m forced to turn to a man I haven’t needed since I was eighteen years old and make sacrifices to save her, because despite pushing her away, Gia has weaved her way deep into my heart.

Gia
I don’t know what I ever did to upset Blu. Since the day he turned up at the Kings Reapers’ clubhouse, he was rude. All I ever try to do is be nice, but it makes no difference. The man loathes me. When a series of events push us together, things begin to change between us. Maybe he realises I’m not the princess he seems to think I am.

Don’t get me wrong, I love my family and I’ll do anything to help them, including marry the great Ricardo Donini, but it doesn’t hurt to get to know Blu too.

It’s not like anything will ever happen between us . . . right?

Please Note: Nicola Jane’s Kings Reapers MC series is set in the United Kingdom and her books are published in British English. Because of this there may be variations in spelling.

Saving Blu is the fourth book in the Kings Reapers MC. I had so much hope for this book after hearing snippets of Blu throughout the previous books.

Blu is the newest member of the MC and he is the dark quiet type. I expected to love him. I didn’t, he came across as a controller ass.

Gia is the princess of the local mafia and is off limits to the MC. But Blu has a secret and that secret might help him bag his lady.

Although there were parts of this story that annoyed me to no end there was actual parts that I loved. But unfortunately the annoying outweighs the good.