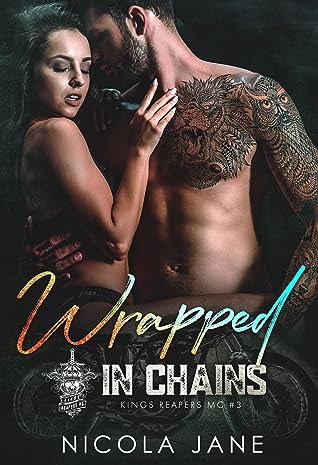 Her smartass mouth and those baby blues had a lot to do with it. She made it apparent as hell she isn’t scared to put us in our place. Fuck if that wasn’t a turn on. I don’t remember the exact time I started loving Leia. It just happened.

Now she’s approaching her twentieth birthday and it’s getting harder everyday to resist her. So hard in fact that I stupidly slammed my lips against hers, and it made everything worse. She’s now at the forefront of my mind, every night, and every day.

Not only is she in my damn head, but everywhere I turn. Not that I’m complaining. I don’t mind going around a corner and seeing the way her cheeks flush a rosy red at the mere sight of me.

There’s one problem, she’s starting to look at me with hope in her eyes.

The kiss alone was reason enough for my Prez, Riggs, to put a piece of lead through my skull. Why? ‘Cause the Prez’s sister is off-limits.

Being the president’s sister means I’m constantly being cock blocked. I mean, how many girls my age are still virgins at nineteen?

Riggs is the classic older brother with his protective ways and how he’s overbearing as hell. He knows my every move, sometimes even before I’ve made it. And if he isn’t on my back, then one of his club members sure as hell is.

That’s where Chains comes into play. He’s the club’s Enforcer, and the man tasked to be my new bodyguard. He’s ten years older than I am and takes his role way too seriously.

Little does he know I’m ready to cut loose and shove his protection, as well as his club, right where the sun doesn’t shine. I want a life, and I’m determined to get it.

This is the third book in this series and although I’m really enjoying them, some of the men are really annoying me and need to grow up pronto.
However the ladies make up for it in a big way.

Chains is the enforcer for the King Reapers MC series, he has this older, sexy and smoldering vibe to him.

Lelia is off limits and the princess of the club. She wants nothing to do with Chain but just can’t help herself and feels the pull towards him.

“You’re so beautiful, Leia. Why the hell would you wanna give me something so important?”

This was a fast paced story that was so good, but unfortunately the drama of other MC brothers caused me to roll my eyes at times and wonder if its babies running this club or men. That aside a good story with great female secondary character’s that made the book so much better.