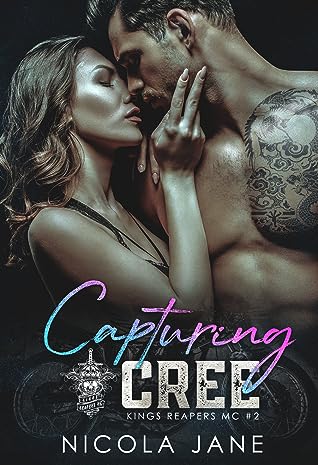 Eva
There is nothing wrong with believing in true love, right? Maybe I’m the type of woman who watches too many happily-ever-afters, but I want my prince charming. If I know one thing for sure, it’s this — I’m not going to find him sitting around at the Kings Reapers MC’s clubhouse.

Don’t get me wrong, the men here are hotter than Hades, but they’re more like Thor. Strong, overbearing, dominant, and demanding. Just the way I like them.

There’s only one person who isn’t like the rest, their VP, Elijah Cree.

The rudest, most arrogant man I’ve met in my entire life. He’s a miserable person and on top of it, he hates me. He’s told me I can’t be around any of his brothers, bothered by the mere presence of me being here. I don’t know what this guy’s problem is, but he’d better get used to me since I’m not going anywhere. My best friend is his Prez’s ol’ lady.

Cree
There’s a reason I don’t date, and I can’t tell you the last time a woman caught my attention. That is, until Eva showed up.

From the second I saw her something inside me changed. It’s like my stone-cold heart thawed out just a little. I’ve told all my brothers she’s off limits, and since she caught wind of that she’s become a sassy little shit. She isn’t afraid of me, and her temper proves that.

Little does she know the way she acts tugs at my heart, and my lips. The woman makes me wanna smile, to let my guard down and give it a shot. I won’t, though. ‘Cause I won’t fuck up something so perfect.

After she makes it apparent she won’t be goin’ anywhere, I start to contemplating goin’ to battle with my inner demons. What harm could it do? I’ve already told the boys none of ‘em can touch her, and they’d better not. I’ll ri2108p their fuckin’ arms off if they even try.

Eva is a hopeless romantic and believes there is someone out there for everyone. Although her happy ever after doesn’t seem to be in her horizon.

“Because you annoy me the most, Sprinkles,” he says, and I frown at the odd nickname. “They’re annoying little candy bits that spill everywhere and make a mess. Crazy little fuckers that brighten shit up.”

Cree is the damaged, silent type who will never be with one woman and isn’t looking for love or any of that carry on.

The secondary characters where amazing and make this universe so good to read.

Although I liked this storyline some little things annoyed me. Previous character dramas that seem to pop up ever chance and Eva being so naive regarding certain issues.

But that aside a very enjoyable read.