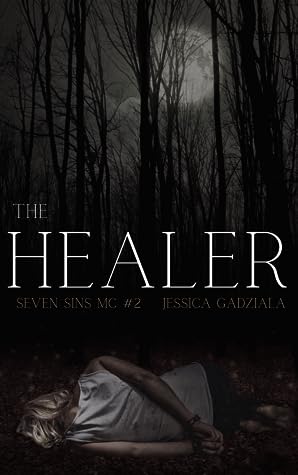 All I’ve ever wanted is to go back home, get my crew back to the life we were meant to lead.
After generations stuck on Earth, I’d lost two of my men to the Claiming. We needed to get back to hell before the rest of us got stuck as well.
I never could have known I would be the next to fall…

I just wanted to start over. A new state, a new job, a fresh start. And aside from a supervisor that wasn’t too fond of me and a regrettable wine-drunk haircut decision, things were going pretty well.
Until hands snatched me off the street, tearing me away from everything I had worked so hard to build, dragging me into a life I could never have expected, with creatures I didn’t know existed, and a man I never could have seen myself falling for…

The Healer is the second book in the Seven Sins MC series by Jessica Gadziala. If you haven’t read the first book I highly recommend getting on it before this book. Although they can be read as standalones why would you want to miss such an amazing book is beyond me!

Ace wants to get home and will do everything in his power to get there. After 2 years of trying finally its working… But then the unthinkable happens, one of their own is spat out of hell!

Jo is a nurse who very much keeps to herself. After being burned by an ex she is doing it on her own and has no interest in anything but her job. She is nabbed in a dark car park on her way out of work and her world is going to change forever!

“It seemed like the longer we were on Earth, the more susceptible we became to pesky human needs and desires.  None of us ever could have known that, prepared for it, since there had never been any records of demons leaving hell and getting stuck in the human world for as long as we had. Or if anyone had, they’d never made it back to hell to tell their stories.  Who knew what the fuck could happen to us if we stayed another hundred years. Two hundred. We had to get back.”

This was an amazing second instalment to this wondrous world Jessica Gadziala has created. It has a mix of dark humour, suspense and action. I’m so looking forward to more books in the series and I can’t decide it I want Drex or Red more but I know it will be great and I’m looking forward to reading whoever Jessica decides to write next.