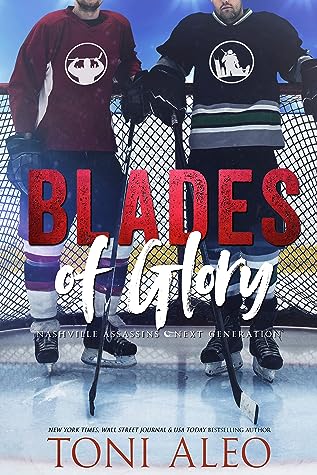 Old vs. Young
Experience vs. Attitude
No Teeth vs. Also No Teeth…
It’s the game some of these players have been waiting a lifetime for. The veterans of the Nashville Assassins versus the new generation of players—their sons.
As part of their prewedding festivities, Aiden Brooks and Shelli Adler have invited the retired Assassins to play a friendly game against the Stanley Cup-winning current team.
And while the guys are battling it out on the ice, the women are running the show from the stands.

Blades of Glory (Nashville Assassins: Next Generation #4) by Toni Aleo . It is a small look see at

We got to see the OG Assassin players which I loved, take on the next generation of Assassins in a friendly game of Hockey. Or so they think, the OG have to show these young guys they still very much have it still!

This was a nice quick read, If your looking for anything other then hearing from some old characters messed in with some new talent with a bit of humor to boot then your not going to want to read this. I thought it was very enjoyable and hit the spot!