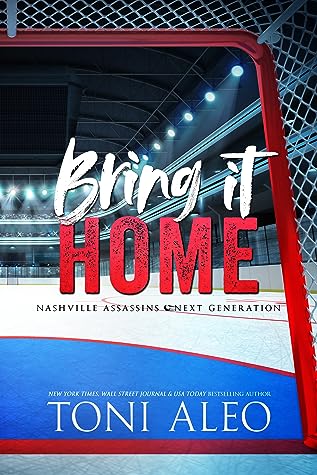 Boon Hoenes only has three goals in life.

To make Posey Adler his wife, to win the Stanley Cup for the second year in a row, and for Shea Adler to like him.

The first, he’s got on lock.

The second, he’s well on his way.

I’m a big fan of the Assassins series and the Next Generation is no different. Bring It Home by Toni Aleo is the third book in the Assassins Next Generation series. It is the follow-on Story of Posey and Boon, it’s a quick Novella read, but it’s packed full of all the good stuff we get from Aleo’s books.

“Every time she walks into a room, I feel like I won the Cup. Over and over again, that fluttery feeling hits me, and it’s all her. She’s just everything for me.”

Bring It Home is a delightful surprise, with plenty of family drama from both sides of the family. I read it in one sitting, it’s definitely a binge read. Full of the feels and some of our favorite Assassin from past books, this is a must read for sure!