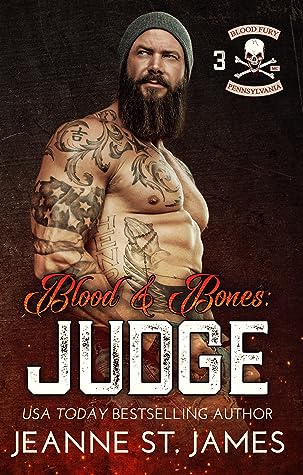 Some risks are more dangerous than others…

Judd “Judge” Scott lives a simple life running a successful business with his cousin, Deacon. As a bail bondsman and bounty hunter, he’s good at what he does.

He never expected Trip to come home and resurrect the Blood Fury MC, reopening old wounds. Being asked by the new prez to fill his late father’s boots as the Sergeant at Arms should be a hard no for Judge. Not only are they some pretty big boots to fill, but he also has too much to lose if things go sideways. Besides it risking his bail bonds business, he’s worried history will repeat itself and Judge wants to avoid ending up in prison, or dead, exactly like his father did. Even so, he reluctantly takes the spot as the club’s enforcer and wears his old man’s colors on his back.

Despite having no interest in a woman complicating his life, he’s intrigued by the young mother who shows up in town with her little girl. However, once Judge learns why she’s come to Manning Grove, he finds he has no choice but to get involved. And that could create more complications than they’re worth.

Note: Blood & Bones: Judge is the third book in the Blood Fury MC series. As always, this book has no cheating, no cliffhanger and has an HEA. It’s recommended to read this series in order.

Blood & Bones: Judge is the third book in the Blood & Bones: Blood Fury MC Series by Jeanne St. James. This book was very slowed paced to start and if I’m being honest didn’t really start until about 70%

Judge is guilted into taking his father’s old position of Sergeant at Arms of the Blood Fury MC against his better judgment. He promised himself and his sister he would never end up like his father or in prison, so jumping back into Blood Fury Mc was not what he had in mind for himself. He also doesn’t do relationships or trust women but when a new woman in town and her daughter cross his path he finds himself interested, very interested.

“Shouldn’t be hard since I’m so fuckin’ lovable. Like a giant fuckin’ teddy bear.”

Cassie has just moved to town and is trying to start a new life for herself and her very talkative daughter Daisy. Broke and down on her luck she is determined to not to reply on anyone but herself. Not looking a big, tattoo biker to be her knight in shining armour but somehow seems to have caught the eye of the bearded biker! They are both completely different but work so well together.

This book was a very enjoyable read, Judge was very likable and the chemistry between both Cassie and Judge was fantastic and the secondary characters as usual spot on. Even with the slow start, I recommend giving this book a go.