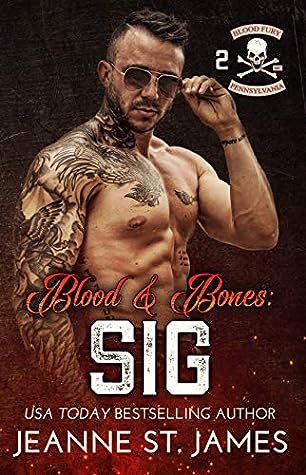 Revenge isn’t always sweet, but it sure can be satisfying…

Sig never wanted to return to Manning Grove since it didn’t hold any good memories. Growing up a part of the Blood Fury MC ended up being a disaster and screwed up his life, which led to him spending most of it in and out of jail. But now he’s not only back, he’s sitting at the table as VP next to Trip, his half-brother who has resurrected the MC from the ashes.

Still bitter about what went down twenty years ago, he’s now trying to move past it and stay out of jail for good. Until he finds a beaten and abused woman running through the woods, trying to escape her captors. Now all he can think about is revenge on the Shirley Clan, a group of sovereign citizens who follow no laws but their own. And if he isn’t careful, he might end up right back where he vowed to never go again. Behind bars.

Note: Blood & Bones: Sig is the second book in the Blood Fury MC series. As always, this book has no cheating, no cliffhanger and has an HEA. It’s recommended to read this series in order.

Blood & Bones: Sig is the second book in the Blood & Bones: Blood Fury MC Series by Jeanne St. James. I started this book and I wanted to HATE Sig so much. He came across as such an eejit! But I know St. James books and they are all amazing so I gave him the benefit of the doubt and kept with it!

Sig has problems… a lot of them. After a devastating childhood that led to some  bad choices that in turn, resulted in him being incarcerated one too many times, he is released from prison. His brother Trip, president of the Blood Fury Mc comes looking for him and wants him to be his second in command. Bitter and really having no more options he decides to give it a go at least until something better comes along. He then discovers a naked woman running through the woods and she changes his life!

“When I’m not with you, I’m in fuckin’ pieces. When I’m with you, you make me whole. It’s the only time I feel complete.”

Autumn AKA Red has been held captive for by crazy imbed people on the mountain for well over a year. She finally escapes running through the woods, naked as the day she was born. She runs straight found by a big tattooed man, Can she trust him to help her. Well she really has no choice.

“We can’t always choose what happens to us, but we can choose how to handle it.”

This book turned out to be so sad, St James took to very broken souls and put them together where they slowed started to heal each other. It was full of pain, heartache and love. It was just brilliant. As always with St James her secondary characters where brilliant and she even gave us a look into future characters like Syn, Sig’s younger sister. This book was so good in so many ways and I highly recommend reading it!