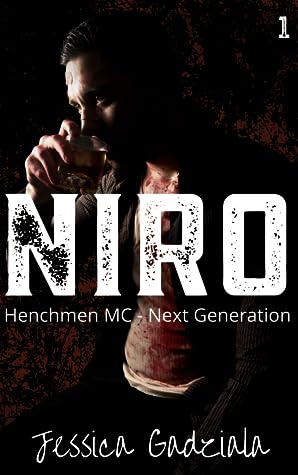 Joining the MC had never been a question.
Raised by an ex-cage-fighting member, Niro hadn’t seen any future for himself that didn’t involve bikes, guns, violence, and the brotherhood he’d learned to revere above all else.
But joining the Henchmen meant he couldn’t have the only other thing in life he wanted.
Andi.
The daughter of one of the OG members of the club.
His childhood best friend.
The only chink in his otherwise impenetrable armor.
For years she was gone. And he did everything he could to forget her, to become the kind of monster she would never look twice at again.
The problem was, she was back in town.
And new enemies were around every corner.
Ones who might set their sights on the only woman who could ever mean anything to him…

Niro is the first book in the Henchmen MC Next Generation series, by Jessica Gadziala. I’ve been waiting for Jessica to write these books and wondering how she would go about it. She starts the next gen off with Niro.

Niro has been in love with Andi since they were both kids but he knows he’s not good enough and her father would never approve. That doesn’t mean he can’t be her friend and be there for her when she needs him. It get harder and harder with every year. When she head off to college he knows he needs to let her get on with her life, so he cuts ties.

Andi decides that a big city job in a Vet clinic is not for her so ends up moving home after college and facing her feelings is something she is forced into by her friends.

This has all the angst and feels that you learn to expect from Jessica’s books as a long time reader. She can do no wrong and this book is just another fantastic read from her. The secondary Characters as always are a dream and leave me wanting more in the future. Highly recommend reading this book.