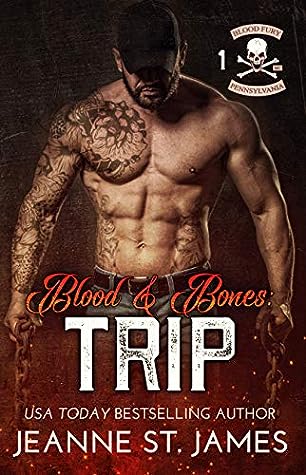 Despite spilled blood and broken bones, from the ashes Blood Fury will once again rise.

Trip, son of the former president of the Blood Fury MC, is determined to resurrect his dead father’s destroyed club. It’ll be a long, difficult road as the new president attempts to rebuild the club from the cold ashes left behind.

Bad blood and bitter memories are only some of the obstacles Trip has to overcome. The local police department, Manning Grove PD, is another, since they don’t want to see their small town once again overrun by outlaw bikers.

Then there’s Stella, a local bar owner and a major distraction Trip doesn’t need, but can’t resist, even though she gives him every reason to. She’s tough, she’s broken, and the last thing she wants in her life is a man like him.

In the end, Trip has to decide if the war is worth fighting. And if Stella is the warrior he needs battling by his side.

Blood & Bones: Trip is the first book in the Blood Fury MC series. As always, this book has no cheating, no cliffhanger and has an HEA. While it’s recommended to read my Brothers in Blue series first, it’s not necessary.

Blood & Bones: Trip is the first book in the Blood & Bones: Blood Fury MC by Jeanne St. James. Trip is an ex-marine who has just been released from prison and found out his grandfather has left his farm and everything he had to him in his Will. Determined to resurrect his father’s MC he starts putting his plan to play.  There’s a lot of bad blood and bitter memories for many who are old enough to remember the originals but he is determined to have everything above board and legal.

This woman was going to be his ol’ lady, his goddamn queen. She was going to stand next to him while he rebuilt what the past destroyed.

The last thing he needs is to run into Stella, a blast from his past. A love sick puppy who followed him around when they were younger. Stella is trying to keep her head above water, she inherited her father’s pub but she also got his debt as well and is struggling to keep the bar open. This is all she has left and she is not going to fail… but maybe she is if she doesn’t get help and the last time Stella will do is ask Trip for help.

“What’s mine? If you take it all, what’s left for me?” Without even the slightest hesitation, he said, “Me, baby. You got me. You can have all of me.”

This was a gut wrenching, heart-breaking but such a fantastic read. I loved every minute of it and I loved seeing everything come together for Trip right from the beginning. The secondary character’s where great and as always done so well by St. James. I highly recommend this book!