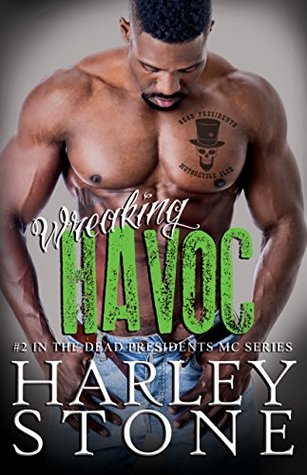 Fresh out of jail, Dead Presidents MC Sargent at Arms, Marcus “Havoc” Wilson, is trying to lay low and keep his PTSD-induced temper under control while helping other military veterans rejoin society. In search of relaxation techniques, Havoc stumbles upon an alluring bookstore owner with a violent past of her own who’s able to calm him down in ways he’s never experienced.

Julia Edwards gave up her life of privilege the minute she tried to kill her ex-husband, and she doesn’t want it—or him—back. As a small Seattle bookstore owner, she’s determined to spend her days hidden between the covers of romance novels until her real-life fantasy appears and shakes up her entire existence.

Can these two attempted murderers find peace together? Or will the loose ends from their pasts unravel their future?

Wreaking Havoc is book 2 of the Dead Presidents MC series by Harley Stone and he is their Sargent at Arms. He has just released from jail when he meets bookstore owner Julia.

She was weak and untrained, and I could crush her. I could make her regret ever betraying me. But I was out of the game. I didn’t want to be that person anymore.

Julia has a past that she wants to keep there, but unfortunately it’s her sister’s wedding and she needs a date. A date would show her family, former friends and ex that she has moved on from their world. In walks Havoc to her bookstore and to her surprise he agrees to help her if she agrees to help him out.

Yeah, gardening is fucking relaxing, Emily. I should throw in the spade and give up, but it was about the principle now. I refused to be bested by vegetation.

Wreaking Havoc is a very fast paced read. It is an entertaining story, which is jammed packed with action, drama, and some humour. I was hooked throughout, and the secondary characters made the book for me. I highly recommend this book.