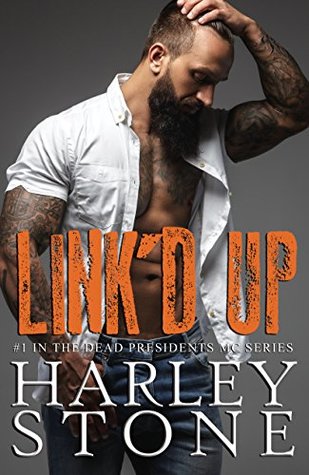 President Tyler “Link” Lincoln of the Dead Presidents MC, runs a club dedicated to helping military vets readjust to society. When his sergeant at arms is arrested for the attempted murder of a prominent Seattle figure, Link’s search for a lawyer brave enough to fight for justice leads him to an alluring defense attorney with a bleeding heart and a steel backbone.

This isn’t the first time Emily Stafford’s commitment to defending the falsely accused has put her in harm’s way. Smart, cautious, and independent, she knows how to defend herself. At least, she did until she joined forces with one sexy, overbearing, tattooed MC president.

Flames run hot as Link and Emily seek shelter in the club’s converted fire station, working against the clock to uncover the truth and save a somewhat innocent man.

Link’d Up is the first book in the Dead Presidents MC #1 series by Harley Stone. It’s also the first book for me by this author. As a first timer to Stone’s books it took me a minute to get into her style of writing and the book.

We’re a motorcycle club. All ex-military, and we specialize in helping vets get back on their feet after they come home from the service.”

Link is a ex-marine who has taken over from his father as president of the Dead Presidents. They recruit ex-military and try support them in life after serving. Link was strong, protective, sexy and loyal to the core. Emily was a great match for him. Sassy, smart and well capable of looking after herself.

Oh, and be sure your gay-dar is on. If one of those strong, sexy, rough-looking bikers happens to be a big, fuzzy teddy bear, you let him know my beehive is full of honey.”

This was a great story and was full of alpha males. The secondary characters where plentiful which for me is a big deal when it comes to series. I think Stone did this well. I’ll be reading more in this series.