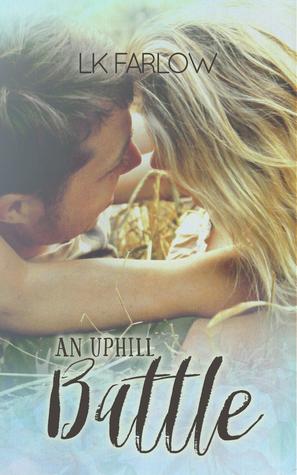 Azalea Barnes has hated Drake Collins since the day he broke her teenaged heart.
Fast forward almost seven years later and her libido still hasn’t gotten the memo.
Now they’re frenemies… with benefits.
Which suits Azalea just fine. She gets what her body craves while keeping her heart safe. Kind of.
Mostly.

Drake has loved Azalea since the day they met. He knows that she’s his forever. Too bad she only sees him as a good time. He wants more. Needs more.
If only he could convince her that it’s real this time. He’s more determined than ever to prove to Azalea that chemistry like theirs doesn’t exist only in the bedroom.

The odds may be against Drake, but he’s prepared for an uphill battle.

An Uphill Battle is the second book in the Southern Roots series by LK Farlow, I have only read one of her previous books before and it was the first in this series. I decided while sick to pick up this next book and give it ago. The book started off strong for me and I was really enjoying the feels and the style of writing.

One day, you’re gonna find a girl who makes you crazy, and when that day comes, you’ll do everything in your power to keep her, because that’s how you know she’s the one.

However when the games started this really ticked me off. I thought there was no need for some of the hurt and pain caused by their own games and all of this could have been avoided if they had just been honest with each other.

Girl’s got it wrong. I want more than strings. I want chains.

Overall though this was a pleasant read and did end up enjoying it.