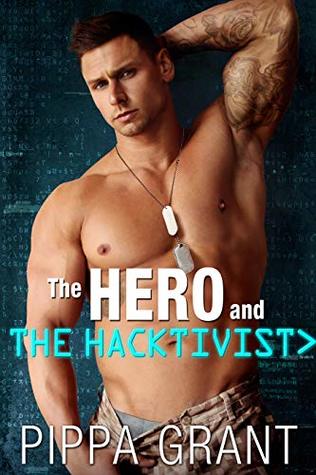 The Hero and the Hacktivist

He has the muscles of Adonis, an ego bigger than the sun, and a very clear desire to get back in my pants. Which would be fantastic if he weren’t a SEAL and I wasn’t a criminal.

Although, I prefer the term avenger.

I’m a hacktivist, cleaning up the cesspool of cyberspace one scam artist and troll at a time, and I sometimes bend a few rules to get justice done.

He’s a military man with abs of glory, sworn to uphold the letter of the law no matter its shortcomings. And if he’d known who—or what—I was, I doubt he would’ve banged me at my best friend’s wedding reception.

Or come back for more.

Which is why he’s now the only thing standing between me and one very pissed off internet troll who’s figured out where I live.

I’m pretty sure he’ll get me out of this alive—and quite satisfied, thank you very much—but I’m also pretty sure this mission will end with me in handcuffs.

And not the good kind of handcuffs.

The Hero and the Hacktivist is a romping fun SEAL / Best Friend’s Brother / Robin Hood in Cyberspace romance between a meathead and an heiress, complete with epic klutziness, terrible leg warmers, and an even worse phone virus gone wrong. This romantic comedy stands alone with no cheating or cliffhangers and ends with a fabulously fun happily ever after.

The Hero and the Hacktivist is the fourth book in the Girl Band series by Pippa Grant. I was going to skip this one and boy am I glad I didn’t. This book stars if with a bang.. Literally! Rhett Elliott is Parker’s brother (Stud in the Stacks)

Eloise is an elf sized computer geek with has so many secrets, but if her friends knew the real her they would think she was boring. She would no longer be the acentric friend. She also likes to fight for the underdog and this has finally gotten her in a bit of a pickle!

I could get addicted to a guy with heart who’s strong enough and quick enough and patient enough to handle me.

Rhett sees the real Eloise, the amazing, strong, intelligent woman beneath the false bravado, and wants help and keep her safe. But Eloise can’t help but make things difficult because why would he want to help her!

“Did you just say aficionados? And in respect to leg warmers?”

Grant gives us a plot that is complete crazy with occasional cringey bits, LOL moments, steamy, and escape from reality fun. There are so many secondary characters in this book that they make the fun so good. I highly recommend this book to read!