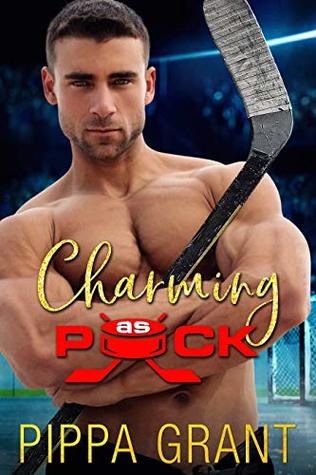 The man could charm the panties off a nun…

Nick Murphy. Hockey god. My best friend’s big brother. My friend-with-mindblowing-benefits. The best thing to happen to my nether regions since my subscription to the toy of the month club. The man I’ve been secretly in love with for years.

I am so done with him.

Except there’s one small problem.

Now that I’ve cut him off, his hockey game is in the toilet. He’s convinced I’m his good luck charm, and he wants me back. But only for his game.

Charming as Puck is a romping fun romance between a hockey player and his sister’s best friend, complete with farm animals, epic birthday presents, and Berger Twin sightings. This romantic comedy stands alone with no cheating or cliffhangers and ends with a pucking awesome happily ever after.

Charming as Puck, is the fourth book in the Thrusters Hockey Series by Pippa Grant. Nick and Kami have been introduced in previous books where we know that Kami has been in love with Nick since they were kids but Nick never saw here as anything other than his sister’s friend. Grant has left us on the road of wondering about these two for some time.

Anger and I aren’t friends. I hate anger. It’s ugly and it’s vicious and it makes me do awful things.

Nick has got it all, hockey, fame, and a perfect no-commitment, friends with benefits arrangement with Kami. But Kami is fed up with Nick’s selfishness and she’s has had enough of cleaning up after Nick’s pranks. Although it breaks her heart she ends their arrangement and decides she’s deserves the whole package not just the secret running around behind everyone’s back.

But all I really have is this gut-level feeling that her soul and my soul fit like two puzzle pieces, and I’ve just been facing the wrong direction my entire life.

I love Pippa Grant books and her quirky goings on. They’re always so funny entertaining with very likeable heroes and independent women who give those heroes a run for their money. This was no different. I laughed throughout and the secondary characters made the book so entertaining and such a brilliant read. I highly recommend this book.