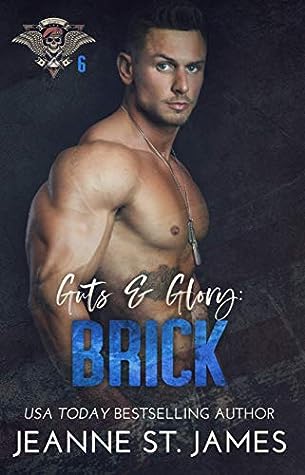 “That city is well fortified which has a Brick instead of a wall of men.”

Former Navy SEAL sniper, Brick, has no idea what hits him when a woman bursts into his life unexpectedly. So not only is he dealing with this female whirlwind, he’s dealing with his own past coming back to haunt him.

Note: Brick is the sixth book of the Guts & Glory series, a six-book spin-off from my Dirty Angels MC series. While it’s recommended to read both series in order, each book can be read as a stand-alone. As with all my books, this has an HEA, no cliffhanger or cheating.

5 The Best for Last Stars

Brick is the sixth and final book in the In the Shadows Security Series by Jeanne St. James. She sure did leave one of the best for last! Londyn is one of my favourite leading ladies from this series. She was so funny, I loved how feisty, sassy and likable, she cracked me up something fierce!

“You need to stop picking yourself apart. I don’t see those pieces of you, I see you as a whole. But even if I did, every piece of you makes you who you are.”

Brick and Londyn’s chemistry was of the charts and so enjoyable to read. This was a great end to the series and I highly recommend not only Brick but the whole 6 books to read.