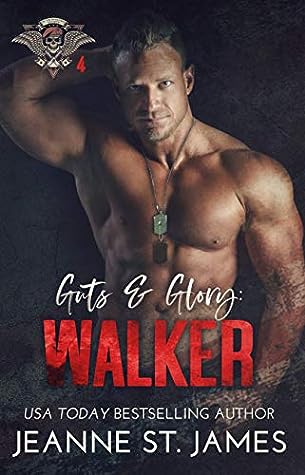 (In the Shadows Security #4)

You can lie down and give up, or you can rise and keep going…

Walker’s been living life by this motto since the age of twenty when the girl he planned his future with shattered his heart and left a hole in his soul. His time in the military, and current job at In the Shadows Security, have kept him moving but he’s always felt the ache of that loss.

From the outside Ellie McMaster has led a seemingly perfect life, big house, rich adoring husband, fancy cars. But it’s all been a huge lie, one that started nineteen years ago when she walked away from her first love and the boy who stole her heart. Now time has run out for her and with nowhere to go and nothing left to lose she’ll have to face down the pain of the past in hopes of saving her future.

But Trace Walker isn’t the young carefree teenager she remembers, he’s now a muscle-bound titan with nothing but hurt and anger shining in his blue eyes. His time in the Army as a Night Stalker wasn’t easy, and he didn’t return home whole. Will he open himself up again and face the risks that come with having Ellie back in his life, back in his heart? Can this be their shot at a happily ever after, or their final goodbye?

Note: Walker is the fourth book of the Guts & Glory series, a six-book spin-off from my Dirty Angels MC series. While it’s recommended to read both series in order, each book can be read as a standalone. As with all my books, this has an HEA, no cliffhanger or cheating.

Walker is the fourth book in the In The Shadows Series by Jeanne St. James and is a second chance at love story. Ellie and walker have history. They both made a decision long ago that they would both regret.

“I’m assuming you’re between a rock and a hard place right now and you need me to be the crowbar.”

Ellie needs Walker’s help and she is desperate so she has no choice but to contact the last person she wants to see or hear from again. But she is all out of options. Walker a former Night Stalker, receives the call from Ellie and all he wants to do is ignore it but something deep inside makes him answer the call.

“This time I’m not letting you go so easily, El. I’m going to fight for you. Fight for what we can have. What we should’ve had all these years. I didn’t fight back then. I should’ve.”

There is a huge secret revealed in this book and I won’t say anymore as I don’t want to ruin the story. As always the author, St. James gives us the best secondary characters and we see some favourites in this book. Always enjoyable. I highly recommend reading this book and reading the series in order. Although it’s not required.