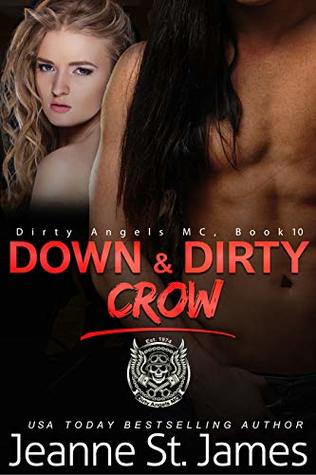 Welcome to Shadow Valley where the Dirty Angels MC rules. Get ready to get Down & Dirty because this is Crow’s story…
When a woman from his past shows up asking for his help, Crow’s not sure he can be the hero she’s looking for.
Crow, self-proclaimed bachelor biker, can’t believe his eyes when a woman from his past shows up at his tattoo shop. She not only needs him to cover up a scar created by a rival MC but is looking for a hero to help her heal and officially move on from a tragic incident. One that dragged her into the darkness against her will and extinguished her light for years. While willing to help, he’s not sure he can be everything she needs him to be. How can he help her when he hasn’t even faced the demons that haunt his own past?
Six years ago, Jazz left Shadow Valley when a life-altering assault changed her outlook on the world-and men-forever. Now she’s back to deal with the scars, both physical and mental, left behind. While hoping Crow will help her with both, she’s afraid he won’t be willing. Crow always considered her too young, now she’s worried he only sees her as broken. However, Jazz knows there’s no one better than the long-time DAMC member to help her move on. Not only determined for her past to stop controlling her future, she needs to replace those memories with something better, while knocking down the barriers holding her back.
But will their age difference be the biggest obstacle of them all?
Note: While this book can be read as a standalone, because of storylines that span the series, it’s best to read them in order. It includes lots of steamy scenes, biker slang, cursing, some violence and, of course, an HEA. If you like alpha males who like to take charge, this book is for

Crow is the 10th book in the Dirty Angels M.C. Series by Jeanne St. James. Where do I even start with this book? It was definitely my favourite book in the series. The pain and the heartache throughout this book was enormous. If you have read the previous books in this series you will have read about both Crow and Jazz, you will also know they both have a painful past and story to tell.

This book was so well written and gave me all the feels. Two broke souls that find each other, but can Crow be the man to heal Jazz’s scars.

This is the final book in the Dirty Angels MC series for the moment. But I will be straight onto the Shadows Security series so still loads to read and love. One thing that really made this series great for me was the wonderful world of characters that St. James created throughout the series. It made these books so great for me and I hope to hear more about them through more of Jeanne St James’ books in the future.