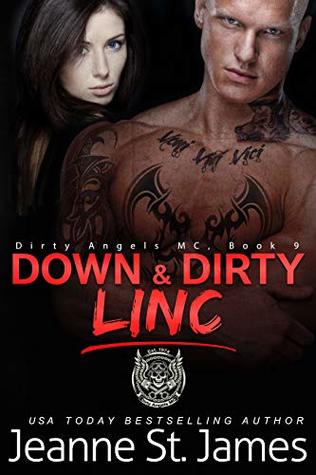 Welcome to Shadow Valley where the Dirty Angels MC rules. Get ready to get Down & Dirty because this is Linc’s story…

For Linc, life was easy. But life’s about to change.

The Dirty Angels MC is Linc’s life. The club his family. His lifesaver when he’d been drowning. Being a part of the club makes life easy for him. He wakes up, rolls out of bed, heads downstairs for grub, booze, women, whatever, before hitting the bar at night for work.

But then there’s Jayde. A dark-haired, blue-eyed beauty, a college graduate and an aspiring attorney. The first time he’d seen her hips swaying through church, he couldn’t keep his eyes off her. Since then, they’ve circled each other for years. But Jayde deserves better than him, so he’s kept her at arm’s length. Linc has nothing to offer her, while she’s poised to take on the world.
Not only that, she’s dangerous. Her father’s a cop. Her brother, too. Even worse, her oldest brother is the club president. And that’s the most dangerous of all. No matter how much he wants to touch her, smell her, taste her, make her his, he knows he’ll take his life into his own hands by doing so.

Jayde’s torn between her family and the forbidden pull of both Linc and the DAMC. Will a mistake they make finish destroying the Jamisons? Or will it heal the long-time rift between the club and her family?

Linc is the 9th book in the Dirty Angels MC Series by Jeanne St. James. From the first page of this book I knew I was in an emotional read throughout. I loved Linc and Jayde, their story was not an easy read but it was so worth the book hangover i had the next day from reading this in one sitting.

This book takes us through Families that love each other but that are broken we no hope of repair. Linc was definitely a love/hate character within this story. One minute I wanted to slap hi the next I was loving him again. It guts you from the very first page and gets you right until the very end.

The secondary characters are all there in force and really make this a must read book within this series. I highly recommend Linc and Jayde’s story.