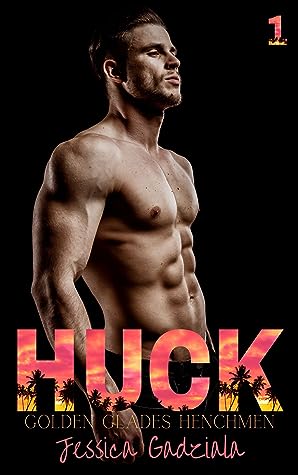 HUCK
Who would have thought that setting up a chapter would be such a hassle?

I was no stranger to the life of crime,
But chopping cars and running guns were leagues apart.
Especially when there were other bad guys in the area that didn’t take too kindly to our arrival on the scene.
So my hands were already full when she showed up, the spunky blue-haired neighbor who just wanted a little peace and quiet.
How was I supposed to know that one nice gesture on my part would threaten to bring the whole thing toppling down around us?

HARMON
Who would have thought that moving next to a biker clubhouse would be such a hassle?

All I really wanted was to be left alone.
I had work to do, and between the bikes and babes, I wasn’t getting anything done.
But when one little drive-by pushes me out of my comfort zone and into a world where trouble can hide around every corner,
How can I suddenly be a target in a game I didn’t even know I was playing?

Huck is the first book in the Spinoff series Golden Glades Henchmen Series by Jessica Gadziala. We’ve been hearing little snippets from these MC men from the last few Henchmen books and I for one was excited to see who was going to be first up. Huck, the Prez of the Golden Glades was first up and oh it did not disappoint!

Harmon decides to rent the house next door to an MC for 2 reasons, one it was cheap and 2 she was desperate to get on of the city and settle somewhere in the burbs. She works from home but not your normal 9 to 5 so she though it would be grand.

There was so much pain and angst in this book but it made it brilliant. The characters were all as usual for Jessica Gadziala, spot on! The secondary character’s that make up this MC world were just brilliant and made the story for me. Really Huck and Harmon shouldn’t work together but they do and I highly recommend this book!