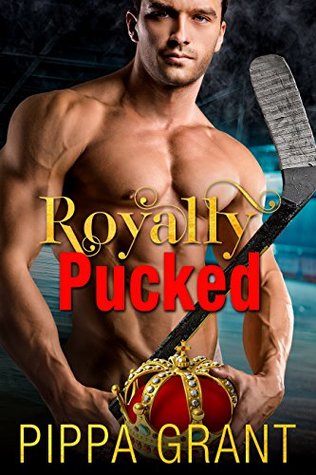 A hockey-playing prince, a most improper lady, and one accidental pregnancy…

When you’re an heir so spare that getting attacked by a shark is more likely than you ever wearing the crown, you’re only allowed certain liberties. Yet still, those liberties can bite you in the ass.

Even then, I’ve been banished to America for a year under the pretense of playing professional hockey while my father cleans up my latest mess. But trouble follows me wherever I go. Generally trouble of the beautiful female variety, and Gracie Diamonte is no exception. Or possibly, she’s the best exception.

Until the dinosaur suit. The cookie incident. And the accidental pregnancy.

Of course I’ll do the right thing.

Just as soon as I solve that pesky problem of my royal betrothal.

I’m about to be the biggest scandal to rock my country and there’s a good chance my father may throw me to the sharks after all. The funny thing is I’ve heard that raising children may not be so different from swimming with the sharks. So no matter how you look at things I am Royally Pucked.

Royally Pucked is a hilariously wrong romance between a spare heir and the lady least likely to ever wear a princess crown, complete with dirty cookies, an emotional support monkey, and lots of pucking around. This romantic comedy stands alone with no cheating, cliffhangers and ends happily with a family of…more than two.

Royally Pucked is the second book in the Thrusters Hockey series by Pippa Grant. Manning Frey, is not only a professional hockey player with the Copper Valley Thrusters, he is fourth in line behind his brothers and nephew for the crown of Stolland, a Viking country in the Norwegian Sea. He has been given a year to play hockey in the United States. Partly because he was caught doing something he shouldn’t have been and also to help promote the tourism in Stolland,

“What would you be if you didn’t have to be a prince?” I whisper. His attention lifts back to my eyes. “Yours.”

Gracie Diamonte, is the younger sister of Joey from the Pilot & the Puck-Up, she owns h little bakery in her tiny hometown in Alabama. Baking is her life and not only does she love it she is good at it.

“A tutor once told me to find what I excel at and to practice that skill to perfection. Being a bloody pain in the arse is most likely not exactly what he meant, but I do take my talents seriously.”

This is definitely a funny and enjoyable read. Watching Gracie make it her mission to save Manning was very refreshing and of course the secondary characters are just as good as previous books. I highly recommend this book.