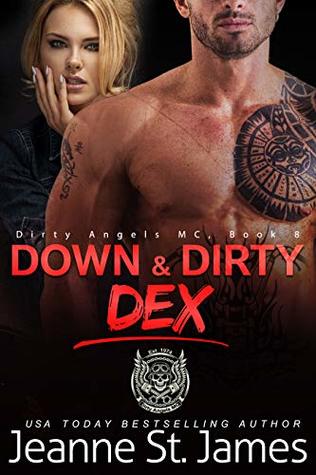 Welcome to Shadow Valley where the Dirty Angels MC rules. Get ready to get Down & Dirty because this is Dex’s story…

A stranger with a diary that contains a thirty-year-old secret. One that could rip a brotherhood apart…

DAMC born and bred, Dex was never like the rest of his club brothers. Even though being a biker was his destiny, something was always missing. He could never figure out what it was or why until one day a woman walks into Shadow Valley Pawn. A sexy, badass woman who challenges him at every turn.

When Brooke discovers the truth about her mother after her death, she comes to Shadow Valley. However, a simple trip to find answers twists into something she never expects. Not only that, but the successful businesswoman crosses paths with a biker who tests the control she loves so much both inside and outside of the bedroom.

Unexpectedly, Brooke not only flips a switch inside Dex and shows him his true self, she learns it’s okay to give up some of the independence she holds onto so tightly.

But that’s not the only discoveries the two make. One secret shakes the club to their core by exposing a member who’s been destroying them from the inside out.

Dex is the eight book in the Dirty Angel Series by Jeanne St. James. Brooke walks into town and into Dex’s life with a bang. She is in town to find out who her Father was. Only knowing a few details from her Mother’s diary that she found after she died several months before. Dex is not happy with all the questions regarding his club but he can’t help but be intrigued by Brooke.

This is one intense book with secrets revealed and traitors exposed. All the DAMC females introduced in the series have been very strong woman, this is one of the reasons why I love this series. Brooke is no exception. I highly enjoyed her fiery independence and dominating ways. As always the secondary characters made this story great for me as well. I couldn’t put it down, it was a page turner and I read it in one sitting. Highly Recommend!