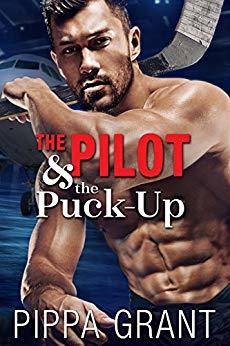 He’s the biggest, baddest, most spider-fearing motherpucker on the ice…

When you’re named after the king of the gods, the world expects certain things of you.

Large and in charge? Honey, I’m the biggest, baddest, mother pucking-est machine to ever own the ice. I shoot. I score. In and out of the rink. I don’t come early, but I come often, if you know what I mean. And I always leave the ladies wanting more.

Until that chick last night.

I’m no one-thrust wonder, and you’re damn right I’m going to prove to her I can do better. But every time I think I’m finally on my way back into her pants, she one-ups and out-balls me.

I should cut my losses, lick my wounds, and walk away.

But Zeus Berger doesn’t walk away from anything.

Especially when she’s the only woman in the world who might be able to handle me.

Since finding Pippa Grants books a week ago I literally have dived over board and into all her books. The Pilot & the Puck-Up is the first book into the Thrusters Hockey series.

Joey “Fireball” Diamonte is one independent lady. Her balls are just as big as any man. She has attended college, served a six year stint in the military, and now runs her own business. She is a kick ass female that takes no prisoners. She has no time for her love life because who needs that hassle when you have a company to run and planes to fly and zero gravity planes at that!

Zeus Berger is a big giant hockey player who likes to that the piss out of himself and others whenever possible. Life is never boring when he is around. I didn’t expect to see a softer, smarter side of him but when I did it had me swooning for him in big way.

“Call me Fireball. I don’t wear lipstick.”
“Damn, girl, could’ve fooled me. Think I need to know your secret.”
“I eat my enemies for breakfast and wear their blood the rest of the day.”

This book was so funny and had me in stitches through most of it. It also had the feels and the relationship between the two was perfect. They were perfect for each other. The secondary characters where a plenty and I couldn’t get enough of them. A good book is made great by the characters the support the main and I stand by that. I highly recommend this book and Pippa Grant. Her book worlds are addictive!

One thought on “Review: The Pilot & the Puck-Up (Thrusters Hockey #1) by Pippa Grant ”