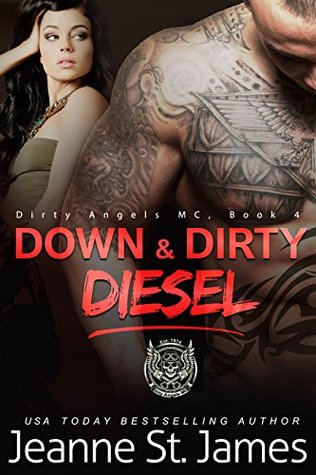 Welcome to Shadow Valley where the Dirty Angels MC rules. Get ready to get Down & Dirty because this is Diesel’s story…

She calls him “The Beast.”

Diesel, the MC’s Sergeant at Arms and enforcer, is tasked with not only keeping the club’s property and its members safe, but also taking care of “business” when needed. His motto, “live free, die free,” means he sees most women as nags and clingers and he wants none of that. The last thing he needs is to have one sitting on the back of his bike and trying to dictate his life.

Unlike the other DAMC women, Jewel wants to be an ol’ lady. Being born and raised within the club, her goal is to earn her place on back of a brother’s bike. But not just anyone’s. No, she had to pick the biggest, most pig-headed and quick-tempered of the bunch. The one she nicknamed “The Beast,” because that’s how he acts both in and out of bed. She’s wanted Diesel for so long she’s not about to give up the fight to become his. She’s bound and determined to win this battle one way or another.

Diesel fights his desire for Jewel until a rival MC threatens what he realizes is his, and no one gets away with that. No one.

Diesel is the 4th book in the Dirty Angels series by Jeanne St. James. Diesel is a beast of a man. From the outside he looks like he could crush you with one look but inside he’s a sweetheart.

Jewel has been a part of the DAMC since birth and they are blood to her, she knows she was born to have an ol’ man. I did not expect to like her, in fact she annoyed me a little at the start but I couldn’t help but warm to her.
Diesel doesn’t want an ol’ lady and wants Live Free, Die Free! A night together leads to a causal relationship between the two, but will he realize Jewel is what he wants before it is too late?

In the past month I’ve become addicted to this author and series. I’m ploughing through them all and loving every single book. This book was no different! These two where so hot together and I couldn’t put the book down. As with all of these books so far the secondary characters are the bomb and I love hearing from previous couples and seeing new faces.

I highly recommend picking this up and reading this series, you won’t regret it. I’m diving right back into the next book.