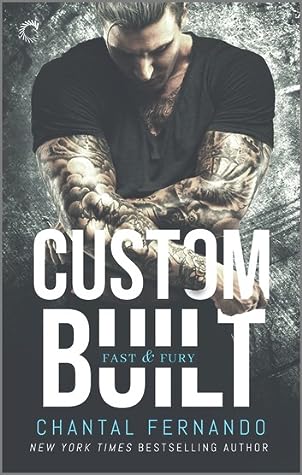 After losing her job, saying goodbye to a lifelong dream and having an all-around cruddy year, Bronte Pierce needs a break. A job at Fast & Fury might be just the thing to reset her life, even though she knows nothing about custom motorcycles. But taking a job isn’t the same as keeping it, and her fresh start quickly turns into a fresh nightmare.

Starting with her boss. Crow is hardheaded, stubborn and brutally honest. He may be easy on the eyes, but he runs with an MC and he’s anything but friendly to Bronte. She suspects he has a softer side—just not for her.

Her whole life, Bronte has known that the only person she can truly count on to save the day is herself. But when a single murder turns into a conspiracy and the threat to her life is more than she can handle alone, it’s Crow who comes through—and her newfound family might just become her greatest strength.

Custom Built is the first book in the new series Fast & Fury by Chantal Fernando and this is a spin-off series from her Knights of Fury series.
The story is being told from Bronte’s POV, and it just felt so one-dimensional, I felt I was missing out on Crow POV and it took from the story in my opinion.

Bronte has lost her job due to her friend and ex-boss’ company struggling financially. Finding herself desperate she allows her uncle help her get a job with the Fast and Furious Custom Motorcycles. There she meets the very hot, very moody and very intense Crow.

I thought for a new series I was missing out somehow. I had read one of the other characters stories but I couldn’t remember which I had read. It was confusing and took away from the story. As a new series it shouldn’t have been so complicated to keep up. That aside I did enjoy this book and now that I have caught I will definitely read more in the series.