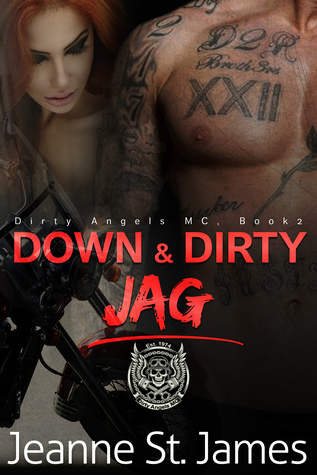 Welcome to Shadow Valley where the Dirty Angels MC rules. Get ready to get Down & Dirty because this is Jag’s story…

The only thing Jag, DAMC Road Captain, loves more than his custom bike is Ivy. He’s wanted her ever since he could remember. However, through the years, he’s had to watch her date anyone but him. Even though she was raised in the club, she avoids dating bikers like the plague. Instead, she gravitates toward the complete opposite: geeks and nerds. Something Jag will never be.

Smart and always independent, Ivy wants to be the property of no man. Growing up in the club, she knows firsthand how they treat women. She regrets the mistake she made by dragging Jag upstairs to his room at the club one drunken night. Ever since then, she’s been doing her best to keep him at arm’s length, though it’s proven difficult. Especially when she finds out his secret, which only endears her to him even more.

Between secrets, lies, and a violent tangle with a rival club, can the passionate, but headstrong pair find the love and solace they’re looking for in each other’s arms? Or will everything just tumble down around them?

Jag is book two of the DAMC Series by Jeanne St. James.

Ivy has been raised in the club and is true Dirty Angels MC. Jag has had a thing for Ivy since they were kids but not matter how he plays it he can’t seem to get her attention. Then on drunken night she drags him to bed and he lets her. Since that night he can’t get her out of his mind but she seems to want to forget it ever happened.

Wires crossed and not much communication between the two have some tense moments. Also Ivy could act like a moody teenager at times. But the two where HOT and I loved their story.

“Right now, don’t care what you call me. Call me Mick, call me Jag, call me asshole. Just call me yours.”

I’m enjoying the underlying storyline of the Warriors MC war that is flowing throughout the series and seems to go from book to book with each storyline. My big enjoyment is the many secondary characters that make this book and this MC world a really enjoyable and great read.

The one thing I’m not crazy about within this series is the need for the MC men to call the woman bitches. I understand they are MC men but I don’t thinks is really needed. Again I do want to stress that I am loving this series other than that.