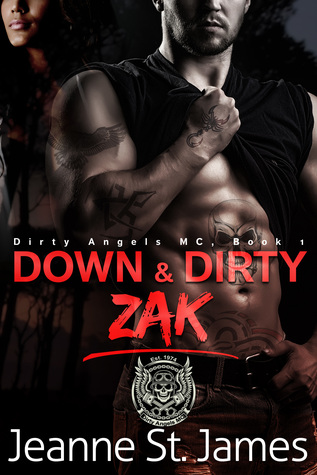 Welcome to Shadow Valley where the Dirty Angels MC rule. Get ready to get Down & Dirty because this is Zak’s story…

After spending the last ten years in prison, Zak, former DAMC president, has a few priorities: to reconnect with his “brothers,” to get drunk, and to get laid. Not necessarily in that order. When he spots a stunning woman in the clubhouse and mistakes her for one of the club’s strippers, those priorities get a bit skewed.

Sophie has no idea what happened to her life. One minute she’s totally focused on building her bakery business, and the next? She’s delivering a cake to the Dirty Angels motorcycle club’s “homecoming” celebration for a member who just got out of prison. Little does she know baking that cake will change the rest of her life, not to mention, make her a target for a rival MC. Normally, Sophie wouldn’t be caught dead with a man like Zak, a tattooed, ex-con, badassed biker.

When a decades old territory war threatens to rip them apart, Zak will do anything to keep Sophie, his club, and the town safe. But being from two different worlds, the threat they’re under may not be worth the risk.

Down & Dirty: Zak is the first book in the Dirty Angels MC series by Jeanne St. James. I am a new reader of St. James and I just can’t get enough of her books. How have I not known about her books before now!?

Zak is fresh out of prison, framed for a crime he didn’t commit and has spent the last 10 years in a concrete cell. He is on a mission to get his life back and have no ties.

Sophie has just started her dream business in Shadow Valley as a baker and is doing everything she can to make it a success. She doesn’t need distractions and she certainly doesn’t need a big, sexy scary biker to mistake her for a stripper and drag her into bed. No she really doesn’t need that type of distraction. A case of mistaken identity sets these two on roads that neither saw coming.

Zak and Sophie’s story was a great first start to this series. They had great chemistry that was very enjoyable to read. The story was made ten times more enjoyable by the gang of secondary characters throughout. If you’re not a fan of having the full story tied into one neat knot then you probably won’t like this ending. St. James brings the storyline right into the next book. Overall a very enjoyable read and I recommend picking it up.