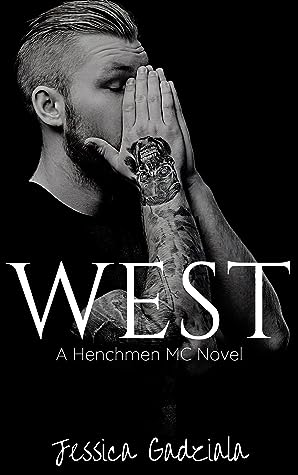 He thought it would be a fun vacation.
Head down the coast.
Get some sun.
Chase some skirts.
Get to know the guys from the new chapter.
Nothing more serious than that.

Until he met her.
Then, well, things got a hell of a lot more serious.

West is the 19th book in the Henchmen MC Series. I’m like how did we get this far in this series. It feels like yesterday when I picked up the first in the series. West & Gus were absolutely amazing together!

West thinks he’s heading down the coast to help the Henchmen set up a new chapter. He hopes to be in and out, then back to his comforts. That is until he meets Gus and realises he doesn’t actually want to leave.

Gus has spent her entire life marching to the beat of her own drum. She is fiercely independent and slightly crazy.

West refuses her very tempting ways for as long as he can. She is a brothers sister after all. But he’s only human and her independence and slightly crazy ways draw him in.

This was a great story and I really enjoyed West. This would be a great book if you want to jump right in with the Miami crowd!

We are introduced to the five men of this new Miami charter and I can’t wait to see what is next in store next for The Henchmen universe.

One thought on “Review: West (The Henchmen MC #19) by Jessica Gadziala”