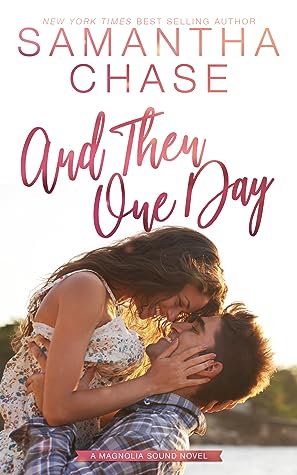 And Then One Day

Courtney Baker is ready to put small town life—and the man she can’t have—behind her. Years of secretly crushing on her best friend’s older brother have led nowhere and she’s finally ready to move on. It would have been a great plan had she not drunkenly blurted out all her feelings and kissed him. At least she’ll be able to forget all about it when she leaves town in less than 48 hours.

It takes a lot to surprise Dean Jones, but a kiss from the girl he’s been secretly attracted to for years does just that. All it takes it one kiss for him to realize he doesn’t want to let her go. But she’s his sister’s best friend and that’s a line he knows he should never cross. Never mind that she seems determined to leave their small town—and him—behind.

When a storm and a broken car stop Courtney from leaving town, Dean sees perfect opportunity to get her out of his system. But can one night ever be enough?

4 Court and Dean Stars on Goodreads

And Then One Day is my first read from Samantha Chase and it started a little slow for me only because I was busy trying to catch up with previous storylines. But once I got caught up it became a page-turner for me.

Courtney Baker is ready to put small town life in her past, she’s also tired of seeing the man she cannot have. Her love life is non-existent. It’s time to move forward with a new town and a new life. At her best friend’s wedding she gets a little tipsy and Kisses her long time crush who also happens to be her best friend’s brother.

Dean Jones has secretly had a crush on his little sister’s best friend, Courtney since she was 18 and when she kisses him at his sisters wedding he doesn’t know what to think. As Courtney tries to leave town a storm has her stranded and Dean comes to her rescue. Can he get her out of his system or does he get her to stay.

And Then One Day has such a large colourful and enjoyable secondary characters that made this story full of heartwarming moments. It was a lovely relaxing read full of sweet and funny moments. I would highly recommend a read.