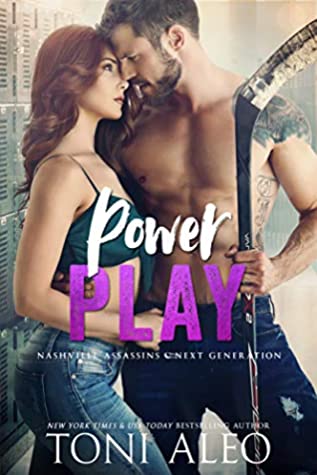 Posey Adler is coming home. After a devastating journey for what she mistakenly thought was true love, she is saying to hell with men and love forever. As the Nashville Assassins’s new assistant coach for special teams, Posey is ready to focus on her job and have the attention on her for a change. She’s been haunted by her place in her sister’s shadow, but this is her chance to shine and force her family to take notice. But in order to make a name for herself, she’s going to have to go toe-to-toe with her team’s leading power play scorer.

Boon Hoenes lives for special teams. The power play is his favorite thing about the game. He loves having that advantage over his opponent. And most of the time, it’s his quick thinking that sends the puck to the back of the goal when he’s on the ice. Off the ice, however, no amount of quick thinking prepared his heart for being dumped by his college sweetheart. Boon has sworn off women, but when Posey Adler comes onto his ice—and kicks him off his beloved power play—he decides she’s one woman he doesn’t want to swear off.

They’ve both been hurt, but instead of going in for the penalty kill, Boon is ready to convince Posey their hearts are the secret to how they’ll win.

How they’ll score the ultimate goal.

Posey and Boon had me from the very first chapter. Power Play is the second book in Toni Aleo’s Nashville Assassins: Next Generation Series. Her Assassins series is one of my favourite hockey series so the next generation was a must read for me.

Posey Rose Adler is the daughter of legendary Shea Adler and owner of Assassins hockey team Elli Adler. She has just ran off to open her heart to someone and they in turn have crushed it. She returns home to parents who are disappointed in her and she wants to prove them wrong. She takes a job as a special teams assistant with the Assassins, this is where she will shine and finally enabling her to step out from behind her sister’s shadow.

“In case you haven’t realized by now, I happen to think you are absolutely stunning. So strong, so confident, and so gorgeous.”

Boon Zachariah Hoenes is winger for the Assassins. He is hardworking, loyal and sweet. He had his heart crushed by his ex fiance who had been having an affair for the last 6 months of their relationship. He feels he will never trust or love anyone again. That is until Posey skates on to the ice and knocks him for six.

“Sometimes two people fall in love after having their hearts broken, but together, as a team, they can build a foundation of love that will be indestructible.”

The chemistry and attraction between these two was powerful they have you hooked until the last page. Power Play is funny, emotional and such a hot story that you wont be able to put it down and will just want to know what happens next. It has the most amazing secondary characters some we’ve heard from before and some are new but all make this story incredible.

I highly recommend picking this book up. You wont regret it. I’m very excited to see what comes next in this series.