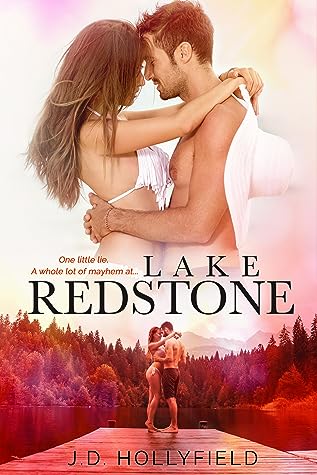 Casey doesn’t have much luck in the dating department, so when her girlfriends ditch their girls only weekend for a couple’s retreat, she’s forced to take desperate measures.

Refusing to be the only single one, she does what any quick-thinking girl would do:

It was almost too easy hiring a stranger to pretend to be her hot, rich, successful boyfriend. What she didn’t plan on was him being hot, successful, and way too much trouble for her liking.

Jim was in a slump in his everyday life. He was bored and needed something to spice up his life. Accepting a gig to play the perfect boy toy was not what he had in mind, but it was too good to turn down.

What he didn’t plan for was the smokin’ little spitfire who hired him. It’s a con, a job, a fraud. But the more she’s in his presence, the more he realizes she may be more than just a ruse.

Three days at a lake house.

Two strangers who cause a lot of mayhem.

Lake Redstone by J.D. Hollyfield is a standalone romantic comedy. This was a LOL fun read for me. I wasn’t sure about Casey at the start I wasn’t sure if I’d love her or find her annoying but ended up finding her sweet, caring, slightly volatile and crazy to top it off. After being invited on a girls weekend away that turns into a couple thing, Casey is no way going on her own. She decided to put an ad up for a fake boyfriend for the weekend. Jim decides it could be fun and answers said ad! Turns out Jim is just what Casey needs.

This was a such a fun read, the chemistry and sexual tension between Jim and Casey is of the charts and I love how they connected with each other. I also loved this crew of people they worked and made the book great. I’d love to see more of them in the future.

One thought on “Review: Lake Redstone by J.D. Hollyfield”