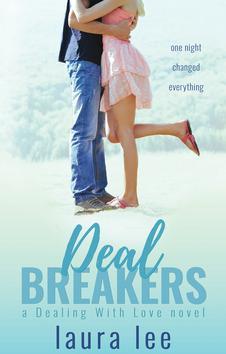 “I’M A VIRGIN, AND YOU NEED TO RELIEVE ME OF THAT.”

What respectable guy could say no to that? Yeah, she was my best friend. But she was also the hottest chick I had ever known. I thought it would be simple. I thought we’d have a good time, then pretend like it never happened.

It turns out, I was an idiot.

Now, she wants nothing to do with me, but I’m determined. I’ve spent the last five years without her and I refuse to waste another day. I have a solid plan. All of my figurative ducks are in a row. I’m going balls to the wall, and I’m not stopping until I win back the only girl I’ve ever loved.

Too bad for me, Devyn Summers has been sitting on a secret that nothing could’ve prepared me for.

*Deal Breakers is filled with lots of laughs, a sexy romance, and an overflowing swear jar. It’s the first installment in the Dealing With Love series, but each one can be read as a standalone.

4 Balls to the Wall Stars on Goodreads

Deal Breaker is a friends to lovers, second chance and secret baby romance. Really it has all the basis covered. When Riley saw Devyn, he knew he wanted her, but she friend zones him from day one. They become great friends who share everything with each other. Devyn has a problem and needs Riley’s help. She can’t leave college still a virgin so she needs Riley to pop her cherry.

This book had all the makings to be an enjoyable read but finished way before the book actually finished and just seemed to have a lot of filler in it. However I will read the second in the series.

One thought on “Review: Deal Breakers (Dealing with Love #1) by Laura Lee”