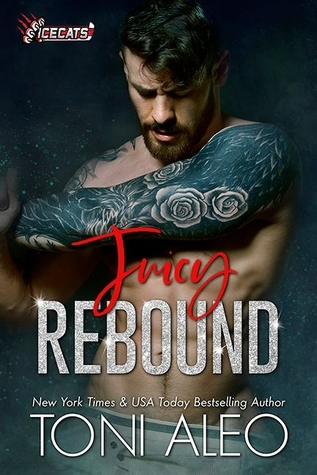 Chandler Moon’s career as a defensemen for the IceCats is on fire. However, his marriage has gone up in flames…literally. He’s resigned himself to the single life and being the best dog dad he can be, but he still holds out hope that one day he’ll find “The One.” So, imagine his surprise when he runs into “The One Who Got Away.”
Amelia Justice.
His best friend’s baby sister.
AKA: “The One Who Is Totally Off-Limits”
Amelia is broken. The punches that life, and her ex-husband, have thrown at her have her down for the count. She’s cut herself off from her family and friends as she works to rebuild her self-esteem and her spirit. Hidden away in a small town, she never expects to reconnect with “The One She Should Have Chosen.”
Chandler is so much more than he was in college: more handsome, more muscular, more tattooed… It was supposed to be a casual fling while Amelia and Chandler worked to put the pieces of their lives back together.
But as every good hockey player knows, a rebound can turn into one hell of a goal.

Juicy Rebound is the first book in Toni Aleo’s new Series IceCats. I’m a huge fan of Also’s Assassins Series so I jumped on this band wagon as soon as I could. We have met Chandler and Amelia before in the Bullies series.

“I turn around as I exhale and say, “Hey! Would you like to try our new… Holy shit!” It all happened so quickly, and I really didn’t mean to curse in front of customers, but holy shit, it’s Chandler Moon.”

Both have a lot of baggage that they bring to the table. Both divorced at an early age and are jaded by the past. Amelia is just not ready. Then Chandler pops back into her life and all the feelings she had for him in the past come flooding back. The chemistry these two have is just too strong for either to ignore.

“Girl, I don’t run, but I’d power-walk for a guy with tattoos and a beard.”

Juicy Rebound didn’t disappoint, it was a really sweet, sexy, funny, heart-breaking & romantic story. We also get a lot of old faces from past books which I loved and we got a great story, I couldn’t put it down.